A war of words between DA interim leader John Steenhuisen and SABC anchorwoman Flo Letoaba has gone viral after she asked him  “which South Africans” he speaks for.

In the interview on Thursday, Letoaba questioned Steenhuisen about his calls to ease the lockdown.

TimesLIVE reported that the DA considered filling papers in the High Court to challenge the rationality of the lockdown regulations, including the ban on online shopping and the restriction on exercise hours.

Online shopping is allowed again, under strict conditions, the department of trade and industry announced on Thursday.

Letoaba also challenged Steenhuisen to name the people who he claimed were “fed up” and wanted the lockdown to end.

In his response, Steenhusien said he had talks with citizens on social media and on his show, CoronaCast, which he hosts twice a week.

“I'm having conversations with South Africans who are frankly fed up with the lack of information,” he said.

In a heated back and forward exchange, the two spoke over each other before Steenhusien threw a jab at Letoaba.

“I am very glad the president has you in his corner because he's obviously been speaking to you,” he said.

Letoaba replied: “I am not going to get a rational conversation here, but thank you very much for giving us your time.” 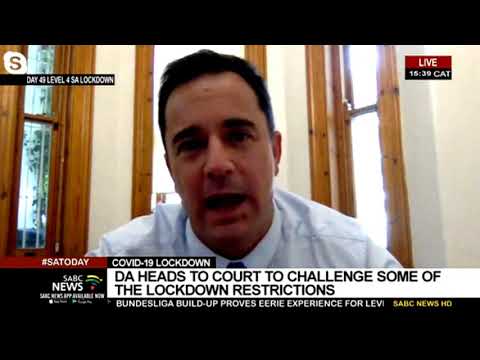 On social media, “Which South Africans?” topped the trending list as many, including former DA leader Mmusi Maimane, weighed in on the interview.

Here is a snapshot of some reactions.

You see I think the key is respect. Ubuntu. That’s all that we need. Journalists have a job to do, we must respect that and be professional in how we respond, i-straight lendaba. pic.twitter.com/xMGiPS3uG0

Flo Letoaba just dealt with John Steenhuisen accordingly with just one question. Which South Africans? Leadership this one✊🏾 pic.twitter.com/y7mXvWGxYF

John Steenhuisen is really trying to make this a DA vs ANC thing instead of standing behind the president who has had to make extremely tough calls so that we don’t end up like Italy or even the US. Instead of even offering solutions, he’s peak Karen-ing and shouting and suing pic.twitter.com/9jEhHKFfsA

Flo handled this meltdown so professionally. How do you purport to speak on behalf on the people of South Africa on such a polarising issue and then throw a fit when asked which people? https://t.co/pXU1AXC99p

This is the 2nd time that I've seen the: "Which South Africans are you speaking for?" question get a guy's knickers in a knot. Wouldn't the simple answer be: "Our Constituents". 🤔 https://t.co/JK4pWfOHE4

Today our lawyers will file papers in the High Court against the SABC for allowing its staff to embarrass our member on national tv." #WhichSouthAfricans

Let me clarify for those who don't know which South Africans @jsteenhuisen is talking to 1) constantia moms who can't have Wednesday brunches at tashas 2) surfers who say lockdown=apartheid 3) the chick who wants to do yoga all over the show https://t.co/1PYeUJJsIg

i don’t understand how steenhuisen can say the majority of SA when the majority don’t have the same access as those who interact with him - on top of that - the party also doesn’t have the majority vote of the nation. the question remains - which south africans?