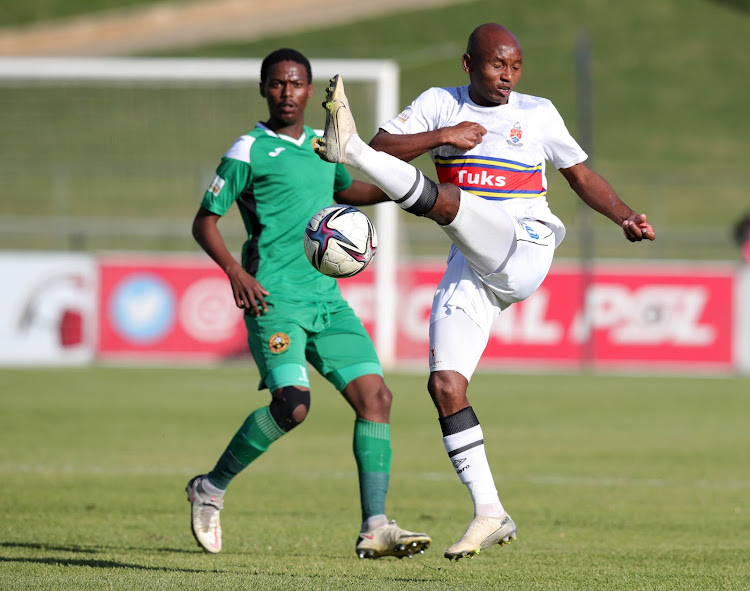 Sanele Barns of University of Pretoria challenged by Azola Ntsabo of Cape Town All Stars during their promotion playoffs match at Tuks Stadium.
Image: Samuel Shivambu/BackpagePix

University of Pretoria (Tuks) and Cape Town All Stars played to an exciting 1-1 draw in their promotion playoff clash at Tuks Stadium in Tshwane on Wednesday but the winner was Swallows.

As a result of the share of the spoils Swallows are now overwhelming favourites to win the Premier Soccer League promotion-relegation play-offs and save their DStv Premiership status.

The Birds were dragged into the play-offs by finishing second-from-bottom in the DStv Premiership, where last-placed Baroka FC were relegated automatically.

Tuks, who finished second behind promoted winners Richards Bay in the GladAfrica Championship, have an outside chance of promotion as they have one match remaining while Swallows have two.

In their last two games Swallows have All Stars in Cape Town on Saturday and conclude their programme at home against Tuks at Lucas Moripe Stadium Atteridgeville next Wednesday.

During the opening exchanges, there were few notable chances from the home side for whom Thabang Sibanyoni and Wonderboy Makhubu led their attack.

Tuks feel Swallows did them a favour with their playoffs decision

The visitors threatened through twin attackers Ronaldo Maarman and Justice Figuareido but they could not find their way past Tuks goalkeeper Thakasani Mbanjwa.

There was a pause in play after 16 minutes when All Stars goalkeeper Luther Jacobs needed medical attention after he collided with the upright trying to save a looping ball from Singkhi Mpedi.

Tuks opened the scoring three minutes before the break through the effort of Sibanyoni who pounced on a defensive blunder by All Stars ‘keeper Jacobs. All Stars defender Ryan Baartman played a risky back-pass to Jacobs who fumbled the ball at his feet and was disposed by Sibanyoni, who slotted into an empty net.

Tuks missed an opportunity to increase their lead after 50 minutes when Sibanyoni was denied by Jacobs after he was released by Samuel Julies to beat the All Stars off-side trap.

Tuks were punished four minutes later when substitute attacker Ndiviwe Mdabuka outjumped everyone in the Tuks penalty box to beat Mbanjwa with a thunderous close-range header.

University of Pretoria and Swallows FC delivered a lukewarm performance in their goalless draw at Tuks Stadium in Pretoria on Saturday as the Premier ...
Sport
2 months ago

University of Pretoria took a big step in the right direction in their promotion ambitions with a 3-1 win against Cape Town All Stars in the opening ...
Sport
2 months ago

Swallows off to winning start in PSL playoffs

Swallows FC kicked off their mission for top-flight survival via the playoffs on a good note, defeating GladAfrica Championship side Cape Town All ...
Sport
2 months ago