WATCH | Close encounter with Kruger lion: he wants to get in!

Image: Kruger Sightings/YouTube This lion in the Kruger Park appears to be waving at people inside a car.

In the Kruger National Park you're allowed to drive with your windows open. In fact, it's recommended because it allows you to hear the sounds of the bush. But, if you get to a lion sighting it's a good idea to roll those windows up.

Luckily for Hannetjie van der Westhuizen her windows were rolled up when she encountered a very curious young male lion.

Hannetjie spoke to LatestSightings.com about what happened, “there was a sighting of a pride of five lions, but, this pride in Kruger is famous for “interacting” with the cars. There was a young male who was especially curious.”

“We were very excited and scared at first, but then we realised that lion was more curious and playful and was just merely investigating a strange object.”

At the beginning of the video, you can see how this lion finds the car's side mirror to be a very nice chew-toy. But after getting bored of that, he suddenly sees the people inside and almost looks like he's waving at them. He climbs onto the window with two paws and tries to bite the glass. 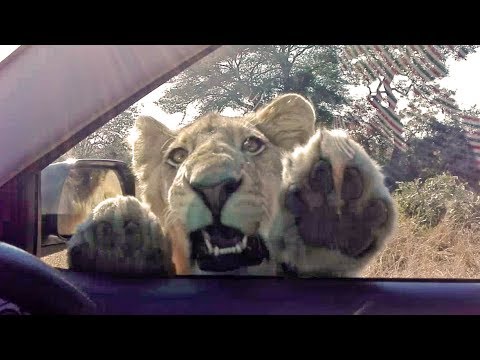