Image: Esa Alexander A metro police officer confronts a jogger out in public without the mandatory face mask as Capetonians headed out to exercise.

The Covid-19 lockdown moves into unknown territory this week, with 1.5-million people going back to work as the government's strict social distancing and stay-at-home rules meet a wave of public fatigue.

The move to level 4 coincides with signs of a public pushed to the limit, their livelihoods on the line in many cases and their patience tested by heavy-handedness and a sea of regulations, which now include a curfew from 8pm to 5am.

A tour of some of the pandemic hot spots by Sunday Times teams this week confirmed the worst fears of medical experts and the government - that social distancing rules are being widely ignored and many people are not wearing masks.

The apparent disregard for, and in some cases open defiance of, lockdown rules, and the problems of enforcing them in overcrowded areas, have raised further questions about the lockdown's efficacy, and people's willingness to continue to fall in line.

The government is facing criticism for what is said to be an increasingly heavy-handed approach by the security forces, as well as claims that it is putting more emphasis on cracking down than on educating the public and encouraging informed compliance.

Growing public apathy could undermine the lockdown's successes in containing the disease, which experts say may only reach its peak in September. Some estimates predict 50,000 deaths over the next three years. As of late yesterday, the infection toll stood at 5,951, with 116 deaths.

In one of SA's worst-affected hot spots, Khayelitsha in Cape Town, residents openly and casually flouted lockdown regulations this week, and made light of the threat. This is despite new infections in Cape Town's crowded townships increasing by up to 173% this week, and in some cases shooting up by well over 20% a day.

The Western Cape has 45% of SA's confirmed Covid-19 cases and deaths.

Similar scenes played out in Gauteng and in KwaZulu-Natal. There was no sign of any determined effort by the police and army to enforce the rules.

During a stop in Kagiso, Krugersdorp, on Friday, police minister Bheki Cele was unimpressed with the open drinking and disobeying of lockdown rules.

"What we have seen today is not encouraging us to say that people are ready to be on level 4," said Cele.

"There are a lot of people who are breaking the laws . there is a lot of smoking, drinking and getting into taxis without knowing where they are going, and we are calling on people to say that if they don't stick to the regulations, then it will give us a problem."

Middle-class South Africans, cooped up at home for 37 days, were also warned about being on the wrong side of the law. Hundreds of joggers and walkers came out on Cape Town's Sea Point promenade on the first day of level 4 on Friday, many ignoring social distancing protocols, and prompting a warning of a police crackdown if they didn't heed the rules on spacing and masks on their 6am to 9am jog. All over the country there were similar scenes.

Although an Ipsos poll this week showed that South Africans still largely support the lockdown, there are signs of a growing impatience with some of the petty rules, and the lockdown's calamitous effect on the economy. In particular, the reversal of the lifting of the ban on tobacco products potentially affected 11-million people. More than 470,000 people have signed a petition to lift the cigarette ban, which could be the subject of a court battle.

The curfew, for which the government has not given a credible reason, has irked many, as did this week's mixed messages from the basic education department on when schools will reopen.

This week, the UN Human Rights Office warned that SA has created a toxic lockdown culture through an increasingly heavy-handed and brutal law enforcement strategy. According to the UN, more than 17,000 people have been arrested for violating lockdown regulations.

Decisions that have been taken, such as unbanning cigarettes, are being reversed without any reasonable explanation.

Academics, constitutional lawyers and human rights experts told the Sunday Times the government risks alienating an increasingly restless and desperate public with some of its new restrictions, eroding the goodwill previously built up.

Human rights specialist Yasmin Sooka said regulations and the reasons for them always have to be clear, with a balance struck between containing the spread of the virus and reasonable behaviour.

"Everyone was initially impressed with the first steps government took, that is, however, changing with a growing approach towards ensuring the lockdown is enforced through security. You do not want to be policed with brutality, which is what is happening.

"Decisions that have been taken, such as unbanning cigarettes, are being reversed without any reasonable explanation. In a period like this, it's vital that human rights are not eroded.

"The president will also have to really look at the behaviour of some of his ministers who do not add value to the current situation."

Constitutional law expert Wesley Hayes said the government risks turning the country into a "nanny" state with its ban on alcohol and cigarettes.

"The curfew makes no sense. I hope the government takes us into their confidence and explains the rationale behind this," he said.

Image: Esa Alexander As the infection rate in Cape Town soared, a soldier in Khayelitsha orders a resident to return to his home and stay there in accordance with the regulations.

Screening and testing across the country is detecting multiple infection hot spots, resulting in the closure of shops, offices, factories and police stations.

An upsurge in testing has largely confirmed what epidemiologists have suspected for some time - that the virus is firmly entrenched and spreading fast.

"To control and isolate people who have the virus is really difficult now," said professor Mark Cotton, head of paediatric infection at Tygerberg Hospital in Cape Town. "Despite the lockdown, the numbers are going up all the time. That is a worry. And it is established in high-density areas like Khayelitsha and Gugulethu, where people have less resources to isolate and wash their hands.

"I am exceptionally concerned and worried about what is coming."

In Khayelitsha on Tuesday, Makazukiswe Mnqika, who was standing in a queue at the Site C Plaza, said he was there to pay his rent. "I have a mask at home but I forgot it because I was in a hurry," he said. "I am aware of the increasing number of Covid-19 cases in Khayelitsha but we have no choice . My landlord has been pestering me, so I had come out. I am just hoping that I don't get the virus." 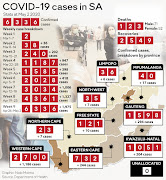 In Johannesburg, Alexandra presented a similar picture of widespread apathy. It has 259 of the city's 828 confirmed Covid-19 cases.

Duncan Mabunda said the lockdown has reduced sales at his roadside hot food stall by 40%. Admitting he was breaking regulations, Mabunda said he had no choice. "I have a two-month-old baby. I need to buy formula and nappies . I'm the breadwinner," he said.

In KwaZulu-Natal, the Covid-19 epicentre is eThekwini, which has the highest death rate in SA. In Umlazi's E Section on Thursday, hundreds of residents shoved each other as they swarmed around a food parcel truck.

Two members of the crowd, Nokwanda Mpanza and Thulile Shozi, were not fazed by close proximity to other people. "We don't have food, why must we worry about masks?" said Mpanza.

The Gauteng and Western Cape provincial governments release daily municipality-level infection numbers, but KwaZulu-Natal said it is not doing so for fear of stigmatising areas with high infection rates. Gauteng does not give a breakdown by suburb due to possible stigma.