Chaos erupts as food parcels handed out in Olievenhoutbosch 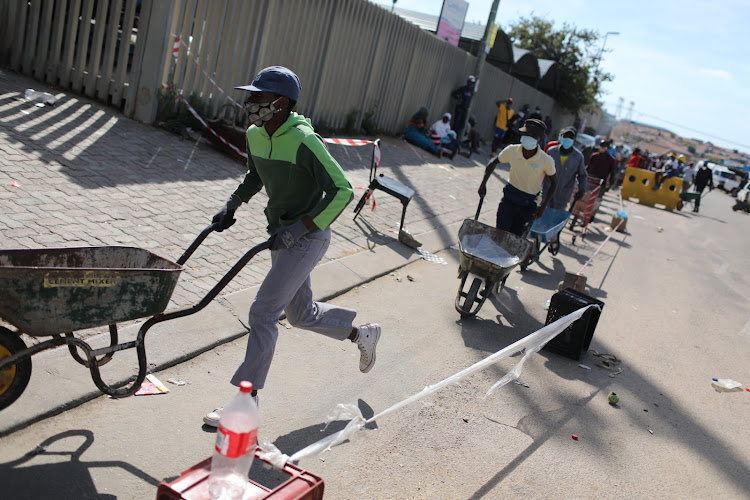 Residents offer their services to cart food parcels for a small fee on 2 May 2020 in Olievenhoutbosch in Centurion, north of Johannesburg. Residents came out in their thousands to receive food parcels.
Image: Alaister Russell/The Sunday Times

The dissemination of false information has been blamed for the chaos that erupted on Saturday morning in Olievenhoutbosch,  Centurion, where a foundation was distributing food parcels.

Senior pastor at 3C church Bert Pretorius, whose church together with the Mahlasedi Foundation are distributing food parcels in Olievenhoutbosch, told TimesLIVE that someone spread false information that Saturday was the last day that food parcels would be distributed.

“We don’t know who did this and why they did it. It could be a 15-year-old bored at home and spread the false information to people in this community,” he said.

Pretorius said they had been distributing food parcels since Wednesday and until now had had no issues.

“The information that today was the last day caused panic among people who were expecting food parcels,” he said. 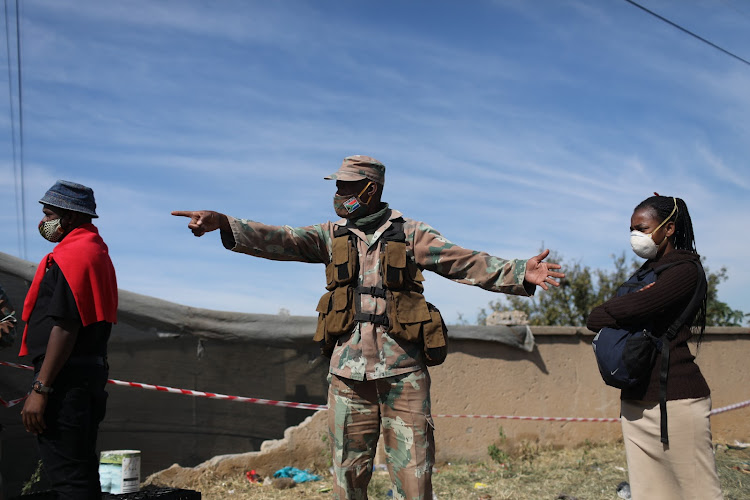 A soldier ensures residents observe physical distancing on 2 May 2020 in Olievenhoutbosch in Centurion, north of Johannesburg. Residents came out in their thousands to receive food parcels.
Image: Alaister Russell/The Sunday Times

According to Pretorius, more than 20,000 people gathered at the school in Olievenhoutbosch where his church together with a foundation were distributing food parcels to the community.

He also said also contributing to the chaos on Saturday was the arrival of people from other communities outside Olievenhoutbosch, who were not eligible to receive the food parcels.

He dismissed suggestions that there was a stampede earlier but admitted that things had got out of control with people trying to force their way into the centre where the food parcels were being handed out.

However, volunteers had managed to restore calm.

Pretorious said they had distributed food to more than 3,000 families since Wednesday and that they had about 30,000 families on their database before the food drive began. He said the project was made possible by the Douw Steyn family trust and other private businesses.

When TimesLIVE visited the area on Saturday afternoon, things were calm with people divided into queues. Soldiers and police were also ensuring that people in the queues maintained physical distancing.

“We are giving priority to the elderly and pregnant women. They have their own queue and the other queues are divided by sections which people come from,” Pretorius said.

Before entering the premises, recipients must show a bar coded tag and form of identification and their temperature is also checked,

Gauteng acting MEC for social development  Panyaza Lesufi rushed to the area after news that a stampede had broken out. He commended the church and the foundation for the great work that they did.

One of the recipients, Patricia Sibiya from extension 19 in Olievenhoutbosch told TimesLIVE she was very happy with the food parcels. The unemployed mother of two said she joined the 2km-long queue at 4am. She only received her food parcel just after 1pm but said it was worth the wait.

Farmers and community in Overberg open their kitchens to the poor

In the Overberg district of the Western Cape, farmers and townsfolk are bartering agricultural produce to keep soup kitchens full and nutritious and ...
News
2 years ago