Scientists, business and labour have delivered a stark warning to the government to fast-track the easing of lockdown restrictions, saying they are having little or no effect on stemming infections - but are killing the economy.

Some members of the ministerial advisory committee (MAC), the body headed by professor Salim Abdool Karim that advises the government on its response to the pandemic, have supported their colleague Dr Glenda Gray, who said yesterday that the lockdown has no basis in science and should be called off.

They said a false impression had been created about the level of consultation with scientists on the lockdown. Others questioned who is advising President Cyril Ramaphosa, calling the official risk-adjusted strategy a "catastrophe". 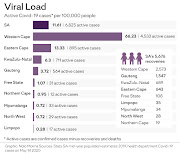 But health minister Zweli Mkhize yesterday defended the regulations, though he conceded that there is not much more the lockdown can do to contain the disease.

And business and labour have called for the easing of restrictions to be ramped up to level 2 as soon as possible.

Gray, chair of the South African Medical Research Council, said the strategy "is not based in science and is completely unmeasured" in remarks to News24.

The MAC scientists the Sunday Times spoke to all agreed that the lockdown should be lifted. Their claims that they are being sidelined tend to undermine the government's insistence that its lockdown rules, and its exit from the lockdown, are always based on sound scientific advice.

However, the acting director-general of the department of health, Anban Pillay, said the government has "adopted almost all of the recommendations" they have made.

"We have never been engaged by Gray individually, or as a collective by the advisory committee, on the reasons for some of the measures that have been put in place. If they were engaged and wanted to understand something, we would be able to provide explanations.

"They could then share their views about alternatives, but we have never had such a discussion. They are directly in contact with us on almost a daily basis," said Pillay.

MAC member professor Shabir Madhi, who chairs its public health committee, said the government is ill-informed. He questioned who is advising the president that SA is doing well. He and others also said the MAC was not asked about measures involved in lifting the lockdown.

"Decisions about different lockdown levels and what should be allowed are not based on anything discussed by MAC," he said.

Several MAC members, who spoke to the Sunday Times on condition of anonymity because they are not allowed to speak to the media, said they had not been involved in lockdown decisions.

"The risk-adjusted strategy was never shared with us, it was presented to us the day before it was announced. We saw the models eight days ago. It's a catastrophe. There's panic in the MAC that decisions are being ascribed to us but we have never seen them, we were not party to them."

"We never had discussions on banning alcohol and cigarettes. No single scientist would have supported the cigarette ban. We don't know who's advising government. This whole thing has been politicised...it's either you are for or against government."

Another MAC member, Prof Wolfgang Preiser, said that all countries that had implemented lockdowns are starting to ease restrictions and "hardly anyone is just stopping it all of a sudden".

"In my personal opinion we should also start easing, carefully, obviously in a sensical way i.e. not distinguishing between long- and short-sleeved T-shirts, allowing people to exercise alone or in family groups throughout the day. Careful does it, and looking at infection rates. We are also moving into winter with influenza and other infections which is another concern," he said.

Another MAC member , who also asked not to be named, agreed with Gray, who advocated for "non-pharmaceutical interventions" such as hand washing, mask-wearing, social distancing, and bans on gatherings bans. "We should release the lockdown but with major community engagement," he said.

Mkhize told the Sunday Times yesterday it was "untrue that we don't take the MAC seriously".

"We have asked the ministerial advisory committee to advise us on a lot of issues and for each issue they set up a team, and research and deliberate before producing their recommendation. Those advisories come to the minister who makes the decision of how to implement. There is a lot of debate that goes into those final advisories," he said. "In some instances I attend their meetings and they report to me, and MECs sometimes. So if anybody was unhappy with anything they could have expressed so directly to me.

"There is a lot of debate about the lockdown, whether it should continue or not. From a health perspective we have got the maximum benefit from the lockdown. Now what we need to do is to adjust all our containment measures so that we now adjust to a new normal of dealing with our lives."

Mkhize - who said MAC members were free to speak to the media - said preparations had to be made when opening up the country, and the MAC is not involved in those.

"Extending the lockdown much further will not necessarily delay the graph much further than we have done," he said.

He said they were dealing with two scenarios, the most optimistic of which is a delay in the peak of the disease until August.

"The pessimistic view is that having flattened the curve initially, it might come back quicker depending on how easily people adjust to social behavioural change. So if you don't go for containment measures in the next few weeks you could worsen the situation. There is no magic about non-pharmaceutical measures, that is what is in the plan that everybody needs to adjust to. You have to create space for those capabilities to be built in the communities to be able to do it."

Mkhize said the risk-adjusted approach is to give society a chance to adjust to the new normal, and that communities will be encouraged to police each other, and ensure that people wear their masks and follow social distancing and hygiene rules.

Ahead of a MAC meeting called last night to discuss Gray's comments, its chair Professor Salim Abdool Karim said in a statement that the entire 51-member body meets weekly and "members have the opportunity to share their views and interact with [Mkhize], deputy minister [Joe Paahla] and the director-general at these meetings".

He said the MAC has submitted about 50 advisories to the health department and "none of the advisories submitted to date have been rejected".

"In addition, the MAC has been working on advisories over the last several days related to 10 issues, including the easing of the lockdown and the alert level regulations."

This advisory will be tabled at next week's MAC meeting.

"Members of the MAC are welcome to share their personal views, both in MAC meetings and publicly," he said.

Professor Lynn Morris, interim executive director of the National Institute for Communicable Diseases, said the use of a risk-based approach in removing the lockdown is based on guidance by the WHO, of which an infection rate is one aspect. Others include that: transmission is controlled; the health system is able to detect, test, isolate and treat every case and trace every contact; that outbreak risks are minimised in health facilities and nursing homes; that preventive measures are in place in workplaces, schools and other places; that risks of the virus being further imported can be managed; and that "communities are fully educated, engaged and empowered to adjust to the new norm".

Sandile Zungu, chair of the Black Business Council, said they told Ramaphosa at a meeting of the National Economic Development and Labour Council on Friday that they would have preferred for the lockdown to be eased further to get the economy going.

"As business collectively we would have loved to move to level 2. We believe it is at level 2 where there will be a major liftoff in the economy."

Martin Kingston, who represents Business SA, said a drop down to level 2 would get the economy fired up. "There's no doubt that unless we can move to level 2, the economy is going to suffer increasing damage."

Matthew Parks, of labour federation Cosatu, said they were keen on reopening the economy so that workers could return to work and take care of their families. "You can't run an economy forever on food parcels and UIF [the Unemployment Insurance Fund]; those things will come to an end."

But he said they were worried about how workers would get to work. "You can have a safe workplace and all that but if workers are being packed like sardines into trains and taxis then you defeat the objective."

Nedbank CEO and Banking Association president Mike Brown said: "SA's level 4 has been a unique country approach - product by product, sector by sector - that fails to recognise the interconnections of value chains in the economy and is overly complex."

National Association of Automobile Manufacturers of SA CEO Michael Mabasa said: "We are very eager to ramp up our operations 100% as soon as possible so that we can get all our employees back to work without further delay."

Liquor Traders Association of SA spokesperson Sean Robinson said their 1,400 members can't wait until alert level 3 to trade, because "it will be too late".

"Liquor stock worth tens of millions of rands is close to reaching its expiry date and the losses will result in the closing of thousands of liquor stores," he said.