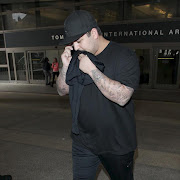 The internet nearly crumbled on Wednesday evening after US star Rob Kardashian took to social media to launch a full-scale attack on his baby mama Blac Chyna.

In a marathon session which lasted several hours, Rob brought more receipts than the local supermarket.

In the rant Rob accused Blac Chyna of cheating and leaving him after he apparently paid $100k (R1.3 million) for her to undergo weight loss surgery. The explosive session ended when his Instagram account was suddenly shut down.

Twitter was shook by the claims, with big stars like 50 Cent, T.I and Snoop Dogg all weighing in on the drama.

Others found their voice through memes and jokes, making Rob and Chyna two of the most trending topics in Mzansi.

So Rob kardashian payed for Blac Chyna to lose weight but didn't pay for himself? 🤦🏽‍♂️ pic.twitter.com/q5S07dvzJb

Rob Kardashian's album is about to top CHARTS. pic.twitter.com/wco9KL9kFe

y'all are so quick with the rob kardashian memes oh my god pic.twitter.com/TEfzrzXbko

Rob and Tyga looking back in a few years realizing they both got played by blac chyna pic.twitter.com/5k0nGvTA5H

It took all this time for Rob Kardashian to finally realize Blac Chyna was playing him. BOYYYYY WE ALL KNEW. pic.twitter.com/3K9DePbCM2

Also, if Rob is exposing Blac Chyna's surgeries can we also get the receipts on Khloe, Kim, and Kylie? Might as well! pic.twitter.com/rUduHt2pTv

So Rob kardashian payed for Blac Chyna to lose weight but didn't pay for himself? 🤦🏽‍♂️ pic.twitter.com/q5S07dvzJb

While Blac Chyna did not directly respond to the claims, her lawyers told People US that they were "exploring all legal remedies" in the matter.

“I am exploring all legal remedies and protection available to my client at this time in attempts to best advise her on how she may want to proceed,” Walter Mosley said in a statement to the publication.