Sunglasses with a built-in camera? These are 10 things Trevor Noah can't live without

Comedian and The Daily Show host Trevor Noah has shared the 10 things he can't go without when he hits the road and fans relate.

The Grammy-nominated comedian recently sat down with the international monthly men’s magazine GQ to discuss the 10 things he cannot live without.

Trevor counted his electric toothbrush, headphones and lip balm as things  he can't live without when he's on the move.

“I used to brush my teeth with a normal toothbrush, and then when you discover this it is like moving from a horse carriage to a car,” Trevor joked.

On the lip balm, he said he prefers balm to chapsticks because chapsticks are a “scam”.

“They say this is medicated. I don’t know what that means but I just like the sound of anything that says medicated.”

Check the video below: 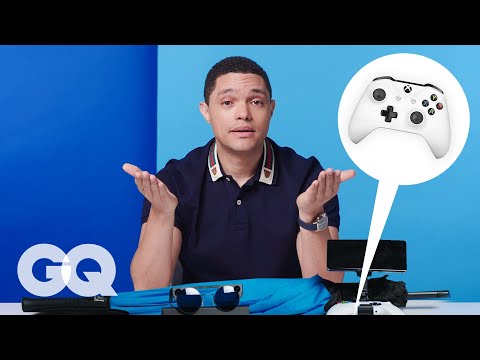 One of the attention-grabbing items on Trevor's list was a pair of Snapchat sunglasses that comes with a built-in camera.

They can take pictures and record videos, and according to the star, are better than a cellphone.

He said he often uses the sunnies on vacation when he would like to document an event, and they make him “feel like a spy”.

Trevor also counted a mini portable humidifier as his must-have. He started using it after suffering an injury to his vocal cords.

TshisaLIVE reported he  missed The Daily Show after he was put on vocal rest in August.

“My doctor told me it's because my voice gets too dry. That's from a lot of flying.

“That's from not drinking enough water, and so I got one of these,” he said.

Taking to social media, fans related to some Trevor essentials.

Finally someone says it!
That's what it actually sounds like when a #gamer plays video games, not the way they show it in movies & TV!https://t.co/v4MCYAHmMi

saw @Trevornoah 10 things he cant live without on @GQ
and let me be frank 9/10 is me except for the lubricant at the end.
I feel like finding my soulmate (in a non sexual way)#broucool

Just watched Trevor Noah's 10 essentials with GQ and related with two things the toothbrush and the Patek Phillip. One item done one more to go 👍🏽