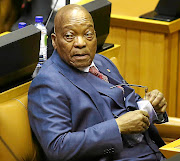 Mmusi Maimane‚ leader of the Democratic Alliance‚ says his party has calculated that President Jacob Zuma must pay R6 million in legal fees.

He told a briefing today that yesterday's North Gauteng High Court ruling rejecting President Zuma’s challenge of the Public Protector’s State of Capture report and its recommendations‚ and holding him personally liable for the legal fees‚ was a landmark victory for the people of South Africa.

"For too long‚ South Africans have been personally paying the extravagant legal bill of a President who – instead of leading a country - spends most of his days in court...."

The effect of the court ruling is that the president must establish a Judicial Commission of Inquiry into “State Capture” within 30 days‚ which makes Friday 12 January 2018 the final day for establishment‚ said Maimane. The commission must be headed by a judge selected by Chief Justice Mogoeng Mogoeng‚ and has 180 days to complete its work.

". . . This is the first instance since the dawn of democracy in 1994 that a sitting President has been required to personally pay – out of his/her own pocket – the costs of litigation.

"On a conservative estimate‚ taking into consideration the DA’s own expenditure on this matter‚ we estimate the total cost the President is liable for at roughly R6 million – which is comparable to his court-ordered payment of the non-security upgrades at his Nkandla homestead.

"This figure compromises an estimate of R4.45 million for litigants who brought the action‚ as well as R1.5 million that was paid to his own legal team.

"The court did not expressly require the President to pay his own legal costs‚ as these are covered by the State Attorney. However‚ we will be pressuring the President to personally pay these costs as well‚ since it is unconscionable that the taxpayers of South Africa should have to pick up the tab for his frivolous litigation.

"It is our view that the President must personally pay back this money‚ he must do so within the next 30 days‚ and he must table his proof of payment in Parliament by no later than 31 January 2018."

The then newly appointed Public Protector Busisiwe Mkhwebane said she would abide by the order the court would make.

However Vytjie Mentor‚ the Economic Freedom Fighters‚ the Democratic Alliance‚ the Congress of the People and the United Democratic Movement participated in the case. Each of the five parties appointed law firms and each law firm briefed three counsel to represent them.