As the popular Regency drama returns to the small screen, we chat to star Rose Williams about her role and what fans can expect from the show

With Bridgerton breathing life back into Regency period drama, it’s time for the return of the BBC-produced drama series Sanditon on Britbox this week. Less steamy than Shonda Rhimes’ Netflix hit, Sanditon is adapted and inspired by the last novel written by Jane Austen, who left the book unfinished when she died.

Adapted by Andrew Davies — the creator of the hugely popular 1995 Colin Firth-starring BBC adaptation of Pride and Prejudice — Sanditon stars Rose Williams as Charlotte Heywood, a single-minded, independent young woman who, after a chance encounter, finds herself visiting Sanditon — an English coastal fishing village trying to reinvent itself as a premier holiday destination for the country’s wealth metropolitan travellers.

We spoke to star Williams about what attracted her to the role and what fans can expect from the show, which has just finished shooting its second and third seasons.

You’ve done other period dramas including Reign and Medici. What attracted you to this project?

First and foremost the fact that it was a Jane Austen adaptation penned by the great Andrew Davies. The first episode really excited me — a headstrong heroine, it was on my dream list to play such a character ... The gods and the stars aligned and I was last-minute cast as Charlotte. I’ll always be really grateful for the role because it’s changed my life in a way.

The 11 chapters that Austen wrote were pretty much dealt with in the first episode of season 1. How have the writers dealt with the rest of the story? Have they taken it in new, unusual directions or tried to remain true to the spirit of Austen?

By halfway through episode 1 of the first season that kind of rounds off where the 11  chapters finish and then the rest took flight with the imagination of Andrew Davies. I was excited and continue to be excited to see the direction of where the story is going. Justin Young — our lead writer on season 2 and 3 — made it clear that he wanted to stay true to Austen’s classic themes that we all know and love, and be inspired by her legacy, but then create a Regency drama where in season 1 we follow Charlotte and we’re really witnessing Sanditon through her eyes, then, as we move into season 2, it kind of opens up to become something slightly more of a Regency drama that follows each of the different character arcs.

Obviously we can’t avoid talking about the massive popularity of Netflix’s Bridgerton and the debates that it has thrown up about representations of sex and race in the Regency era. Do you think Sanditon has also kept up with this change in the way films and series portray the period?

I think the key when it comes to the study of the Regency period in the case of Sanditon ... the character of Miss Lambe, the Antiguan heiress — this wasn’t an imagined character, this was the first character of colour that Austen had ever written and that’s fantastic and another reason that I was drawn to the project in the first place back in 2019. That for me is the key — the inclusion of my personal favourite character, Georgiana Lambe, is true to history basically and for me that’s the key — that people like Miss Lambe did exist. There were Miss Lambes throughout the Regency period. 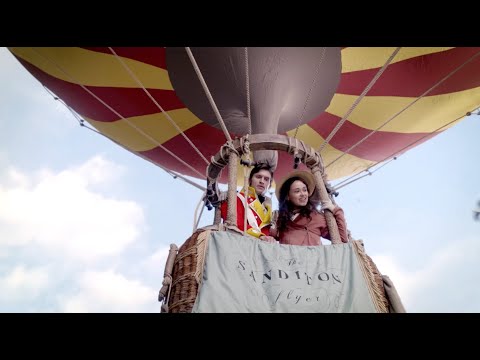 With regard to explorations of what sex looked like at that time — it was a debaucherous time and I’m personally a fan of Bridgerton and there are viewers of that show who might be brought to Sanditon, which I’m very grateful for, but I do think they’re very different shows.

What I find quite interesting about the period is that it was quite debaucherous and rambunctious and there was tabloid press that did exist at the time and so I do think it’s interesting that the Regency period is having its period now because there are quite a lot of parallels between then and modern 2022, I’d say.

What kind of response did you have to the first season?

There’s kind of an online group that enjoyed the show, called the “Sanditon Sisterhood” and they went to great lengths to showcase their appreciation of the show and its characters through, as an example, creating a huge piece of sand art that they had commissioned and recorded with a drone, that said “Save Sanditon!” That noise that was created online played a huge part in the show being recommissioned so I’m hugely grateful and touched.

What can fans expect from the new season of Sanditon?

What’s quite exciting about the second and third seasons is that we really get to follow all the characters on their own individual journeys ...we’ve got the introduction of Charlotte’s younger sister, which is very reminiscent of the sisterhood bonds that we see in other Austen stories such as Sense and Sensibility; it also reflects Jane Austen’s relationship with her own elder sister, Cassandra.

Overall it’s quite joyful, really, but there’s sadness to Charlotte’s storyline but at the same time it’s a show with a lot of heart and a lot of lightness and hopefully a place that people can go to escape a bit and enjoy the delight of the expanding seaside resort of Sanditon.

• Season 2 of 'Sanditon' is now streaming on BritBox.