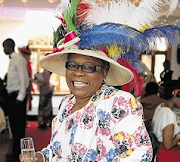 Actress Lillian Dube opens up about staying relevant in the industry.

Retirement is a word that does not exist in Lillian Dube's vocabulary, even after being in the industry for several decades.

Ma Lillian told TshisaLIVE she would die acting and like most freelance thespians could not afford to retire.

"I am always looking for jobs as a freelance actor, so there is no such thing as retirement when you are not permanently employed. I will die acting," she said.

With hit shows like Soul City, Skwizas, Madam & Eve and Generations under her belt, the actress said she would love to have her own show.

Ma Lillian added that she hoped a broadcaster or radio station would offer her a platform soon because she has so much to give.

The veteran said the world of showbiz has changed so much since her younger days and advised young actors to not take the limelight too seriously.

"Today people are called celebrities. In my day we were called actors because acting is hard work and it is a job. Just because you're on TV, doesn't make you any better than the person sweeping the street. Young people take themselves too seriously and it's no longer about the job."

She also advised young actors to take note of the lack of continuity in the industry, which she said upset her.

Ma Lillian said veterans were dying poor as a result of no jobs in the industry and there was nothing they could do.

"I hate it because there is no guarantee of a job, but no one seems to care that this is our life. Some artists don't have medical aid. If we go to the bank for a loan to buy a house, we are not recognised as permanent employees. Even when we have work the money is not great, but we do this for the love of it."