Connie and Shona Ferguson, owners of Ferguson Films, have yet to respond to allegations of mistreating actors, levelled against them by Vatiswa Ndara in an open letter to arts and culture minister Nathi Mthethwa.

In the six-page letter, which Vatiswa released on social media, she revealed that she would not be returning to season three of hit reality show, iGazi, in which she plays a lead role.

She went on to release details of an apparent offer that was made to her by the Fergusons.

Vatiswa then listed why these conditions were problematic. She said the payment was yet to be taxed and she would only get about R82,500 after tax, which may have to sustain her for periods when she could not find other work.

She also said actors were not able to seek further employment until the contract was completed and were allegedly not compensated for work-related activities, such as wardrobe fittings, make-up, public relations and media interviews.

Vatiswa said the contract allowed for limitless calls, which could see her on set from Monday to Saturday, sometimes for up to 12 hours a day, with no additional compensation.

“This particular interaction with the Ferguson Films has not only made me evaluate my own being and sustenance within the industry,” she said. 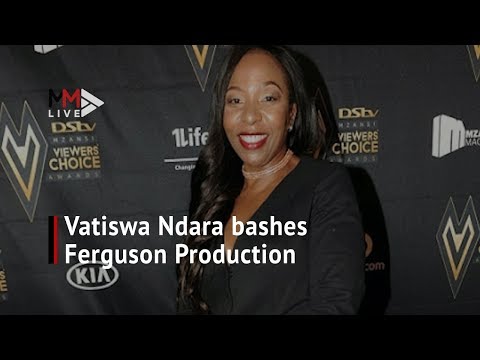 Numerous attempts by TshisaLIVE to get comment from the Fergusons and a spokesperson from their production house were unsuccessful at the time of publishing.

Vatiswa urged the minister to look into the treatment of actors in the industry and said they were undervalued.

“Minister, in this sixth administration, the department of sports and arts and culture has been merged into one. And what is evident about sports is that the women and men  in this sector are highly prized, valued and respected by this patriotic country. Not so with the arts,” she said.

She also asked the minister to address alleged bullying and intimidation in the industry and establish an independent regulatory body to monitor the industry, health, safety and wellbeing of actors.

Mthethwa acknowledged on social media that he had received the letter and his ministerial spokesperson, Asanda Magaqa, told Sowetan that he was considering the contents thereof.

Good day Vatiswa, thank you for taking the time to write this letter. This is to confirm that it has been received. https://t.co/PI44pgsKa1