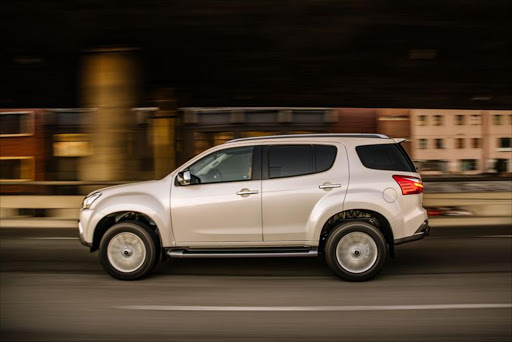 Kind of like trying to imagine a new search engine trying to take on Google, it isn’t easy for a newcomer wanting to muscle into a turf ruled by the Toyota Fortuner, and to a lesser extent the Ford Everest.

Both the Toyota and Ford have their diehard fans, and Isuzu’s new MU-X seven seater faces a tough ride to steal some market share in this league of "real" SUVs, ie those that place more emphasis on rugged adventuring ability than softroaders that are more about car-like driving characteristics.

It’s not Isuzu’s first crack at this segment, though it’s been two decades since the brand’s previous SUV contender, the Isuzu Frontier, was sold here. Still, Isuzu has a lot of brand equity through the KB bakkie, on which the MU-X is based. In May the MU-X reached local showrooms in two versions, a 4x2 and a 4x4, as the first vehicle to be launched by Isuzu SA following the exit of former parent firm General Motors in 2017.

Priced at R568 000 for the 4x2 and R629 100 for the 4x4, both versions are well stocked with safety features that include six airbags, ABS brakes, stability control and trailer sway control.

Like its Toyota and Ford rivals, the MU-X, which means multi-utility crossover, rides on a rugged body-on-frame design. It’s essentially an Isuzu KB bakkie underneath, but in place of the KB’s working-class rear leaf springs the MU-X gets coil springs and five-link rear suspension to smooth out the ride.

And it works. Together with the high-profile tyres fitted, a comfy ride quality is one of the standout characteristics of the MU-X. 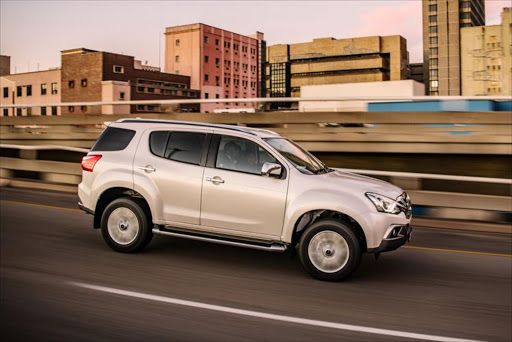 The Isuzu gets around corners with the typical nature of a bakkie-based SUV. If you’re after X5-style handling sharpness you know where to look, but while the MU-X has lots of body roll and the steering’s not exactly sharp, this Isuzu changes direction neatly as long as you don’t try to hurry it too much.

Where the MU-X falters somewhat is in engine output. Paired with a six-speed automatic transmission, both the 4x2 and 4x4 versions are ushered along by the KB’s three-litre four-cylinder turbodiesel engine which, at 130kW and 380Nm, is outgunned by the 130kW/420Nm Fortuner 2.8, the 147kW/470Nm Ranger 3.2 and the other contender in this segment, the Mitsubishi Pajero Sport 2.4 (133kW/430Nm).

The Isuzu’s relatively mediocre torque results in a somewhat leisurely nature that requires a little elbow grease to extract some pace, particularly when long trucks need to be overtaken in a hurry. It may also not be the first choice of vehicle to strap a caravan or a boat to, though it does have a generous three-tonne towing capacity.

But while "sporty" isn’t in its vocabulary, the four-cylinder does speak with a soft voice that, together with decently-muted wind noise, makes the MU-X a refined package overall. It’s fairly economical, with a factory-quoted 7.9l per 100km. 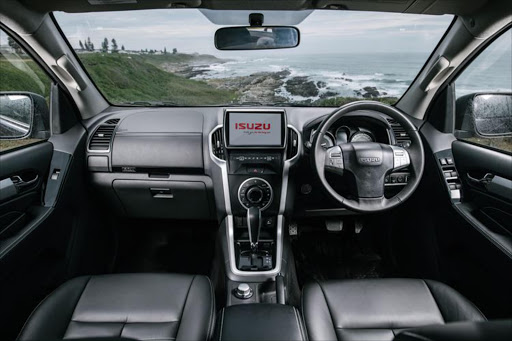 It’s a formidable offroader and the 4x4 version (on test here) ho-hummed its way through a rough and rocky trail with its 230mm ground clearance, low range transfer case and the ability to switch from rear- to four-wheel drive at speeds of up to 100km/h with a twist of a knob.

For those seeking a family-sized SUV the MU-X makes the grade with its seven-seater cabin. The first two rows offer stretch-out space (and have backrests adjustable for angle) and the third two-seater row, while ideally for tweens, is large enough for a pair of adults.

The MU-X has had a fairly modest start to local sales, with 367 units moving off showroom floors in the past three months compared with 3 084 for the Fortuner and 1 221 for the Everest, but ahead of the Pajero Sport’s 136.

It probably deserves to do better, especially with its competitive pricing, but it is up against two rivals with rock-solid reputations, not to mention more engine grunt.