Not one of the R8 billion arms deal submarines is operational 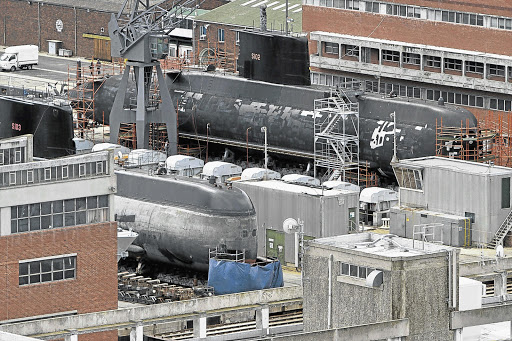 SA Navy submarines in the dry dock at Simon's Town Naval Base. S102, rear, is in for routine maintenance, while S103, front, apparently hit the ocean floor, hence the protective blue plastic hiding it from sight.
Image: HALDEN KROG

And yesterday the SA Navy acknowledged she had been damaged during a "training exercise".

This means that all three submarines - meant to police the oceans - are presently undergoing repairs and maintenance.

The SAS Manthatisi, the first of the country's submarines acquired in the multibillion-rand arms deal, has been in the dry dock since 2007 after a series of mishaps, including crashing into a quay and damaging her steering mechanism.

Then a power cable was incorrectly plugged into her shore power-supply system, causing damage. The vessel's propulsion batteries, which cost R35-million, are being replaced.

Now a full navy board of inquiry has been appointed to investigate what happened to the Queen Modjadji.

The submarine was the only one of the country's three hi-tech submarines operational at sea when she was damaged.

Teuteberg said: "We did a proper technical investigation and now we have convened a board of inquiry to look at all the procedures to see whether there is something we can learn from this.

"As soon as that is completed, we will adapt our procedures of conducting this specific set of safety drills."

He downplayed the latest incident, and insisted the submarine could be back in the water "within days".

However, he said repair work to the vessel's nose would be completed later in the month.

The accident is the latest in a string of submarine incidents over the past two years and comes three months after the Queen Modjadji welcomed a new commander, Commander Handsome Thamsanqa Matsane.

The fleet of submarines cost over R6-billion - rising to R8-billion in interest costs - and cost tens of millions every year to maintain and operate.

This week, the Sunday Times established that:

Teuteberg said he flew to Simon's Town naval base to inspect the damaged submarine.

"I personally went down from Pretoria to Simon's Town to go and have a look at the submarine and speak to the crew.

"When I initially heard about [the accident], I thought, 'Hell, this must have been a bump' ... I spoke to the captain and the officers. Some of them said they didn't even notice the bump."

The vessel's black boxes - which keep a record of her movements and functioning of her equipment - would help determine the cause of the incident, he said.

Parliament defence portfolio committee member David Maynier said: "A full board of inquiry will have to be convened to determine what went wrong and recommend ways to prevent a similar incident in the future. There can be absolutely no compromise when it comes to submarine safety."

South Africa purchased four frigates, three submarines, helicopters, jet training aircraft and Gripen fighter jets in a Strategic Defence Procurement Process that, in 1999, came with an estimated price tag of R30-billion. That figure has since ballooned to an estimated R70-billion, taking financing costs into account.

President Jacob Zuma established a commission of inquiry into the arms deal in September last year to probe allegations of fraud, corruption and impropriety.

Arms deal activist Terry Crawford-Browne said the incident was further proof of the folly of the arms deal. "South Africa has not yet paid for these submarines. They are being financed by Commerzbank until 2016, these loans being underwritten by Hermes and German taxpayers," he said.

"This is another example of what happens in arms deals all the time, but it seems to be happening more than most in our deals. We were sold equipment that seems to be of dubious quality, we were sold it at inflated prices because of the bribes that were paid, and the performance of this equipment across the board has been, to put it politely, very poor," said Feinstein.

He said submarine manufacturer Ferrostaal was under fire for corrupt dealings with Greece and Portugal, whose own arms deals contributed to the current European fiscal crisis: "This [South Africa's submarine deal] is a déjà-vu situation with Portugal and Greece.

"South Africans need to ask ourselves, especially with the arms deal commission of inquiry: was this an appropriate use of our money, given this latest disaster with the submarines?

"Do South Africans who don't have enough to eat today, nor adequate shelter, healthcare or education, believe that this was an appropriate way to spend R70-billion?"

Hawks boss Anwar Dramat last year rejected calls to probe Ferrostaal, a member of the German submarine consortium that supplied the three submarines to South Africa. The company was implicated in making questionable payments to South African "consultants" involved in the arms deal.

Teuteberg said in 2007 that it would cost the navy over R34-million a year to operate its fleet of submarines - R7.8-million each.