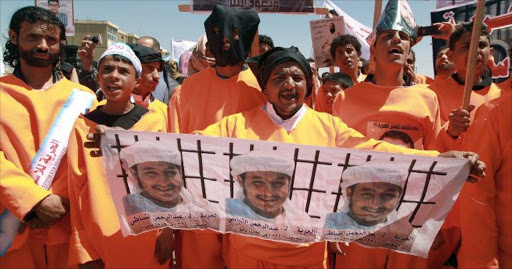 Yemenis wearing orange jumpsuits, similar to those worn by prisoners at the US detention centre in Guantanamo Bay, hold a protest demanding the release of inmates on hunger strike.
Image: MOHAMMED HUWAIS / AFP

More Guantanamo prisoners have joined a hunger strike to protest their indefinite detention at the US-run military jail, with 97 out of 166 detainees refusing food, officials said Friday.

Among the strikers, 19 have been given nasal feeding tubes, and five of those are hospitalized but do not have life-threatening conditions, Guantanamo Bay spokesman Lieutenant Colonel Samuel House said in a statement.

The rapidly-growing protest movement began on February 6, when inmates claimed prison officials searched their copies of the Koran for contraband, according to their lawyers. Officials have denied any mishandling of Islam's holy book.

Lawyers for the detainees say the official numbers are too low and that around 130 inmates are observing the hunger strike.

The strikers are protesting their extrajudicial incarceration during the 11 years since the prison went into use for terror suspects detained mostly in Afghanistan and Pakistan.

"The illegal detentions without charge or trial at Guantanamo Bay have gone on for more than a decade with no end in sight, so it's not surprising that detainees feel desperate," said Human Rights Watch counterterrorism adviser Laura Pitter.

"The Obama administration simply has to do more to end this unlawful practice that will forever be a black mark on US history."

"The president remains committed to closing the detention facilities at Guantanamo Bay," said Carney, adding that the White House was "closely" monitoring the hunger strike.

"A fundamental obstacle to closing this detention facility... remains in Congress."

Carney was referring to legislation that has hampered the Obama administration's efforts to close the jail.

Prisoner advocates and rights groups have meanwhile raised concern over the method of feeding detainees via tubes. House, the Guantanamo spokesman, refused to characterize the method as force-feeding.

"I refuse to say 'force-feeding,'" he said. "It refers to a cartoon where individuals are strapped, yelling, screaming, mouth open and food is dumped down the person's throat and that is not the case.

"We will continue to prevent people from starving. It is by all means the rights of detainees to protest, however it is our mission to provide safe, secure and a humane environment and we will not allow our detainees to starve themselves to death."

But rights groups and medical experts have differed sharply with the US military on feeding inmates via a tube.

"There is a discrepancy between the position of the United States and the ICRC," said International Committee of the Red Cross director Peter Maurer.

The Constitution Project, a non-profit group that promotes bipartisan consensus on legal reform, concluded in a recent report that "forced feeding of detainees is a form of abuse and must end."

Lawyers representing detainees at Guantanamo also condemn the practice. Attorney Omar Farah said one of his clients at the jail reported being force-fed to the breaking point.

"He reported that eventually he had to give up because of the harshness with which he was treated," Farah said.

"He reports he was force-fed to the point he was overly full and he would vomit, being strapped down. The regime was so harsh that eventually he gave up."