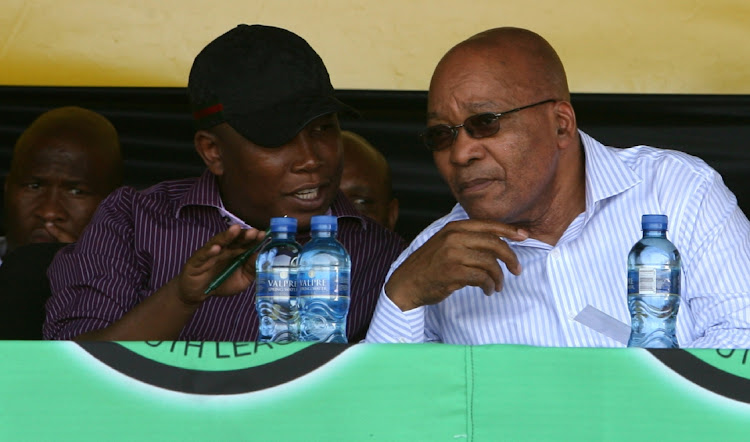 Former president Jacob Zuma is said to have instructed members of the ANC Youth League (ANCYL) in KwaZulu-Natal not to prevent EFF leader Julius Malema from entering his Nkandla homestead, apparently after receiving reports they were planning to do so.

“They are mobilising. We will chase youth league members because the visit is not political,” said a source with intimate details of the meeting scheduled for Friday.

Zuma and Malema stunned the country this week when they agreed on Twitter to have a meeting over tea.

TimesLIVE understands Malema is due to arrive in Nkandla at 11am.

“[The] Old man said youth league members must not stop Julius. Juju is coming at around 11am or 12pm with Ekurhuleni mayor Mzwandile Masina. It will be a meeting extended to lunch,” said the source, who asked to remain anonymous.

The meeting comes after Zuma announced he would defy a Constitutional Court order by refusing to appear before the state capture inquiry.

Malema told one Twitter user that he will not back out of the tea date.
Politics
11 months ago

It's not yet clear what the two politicians, who were once political allies but became rivals, are due to discuss in their meeting. The state capture inquiry is, however, likely to form part of their discussions.

It’s also understood the two will come out of the meeting after smoking a peace pipe  following years of bitter political rivalry that saw Malema fired from the ANC, only to form the EFF, a move him catapulted him to parliament where he became a thorn in Zuma’s side.

I think Julius Malema also wants to apologise and concede he made a mistake.

The former president’s nephew, Inkosi Simphiwe Eric Zuma, of the Nxamalala Traditional Authority, said: “I think Malema realised he was being used to get rid of Zuma. Even during the time the president was no longer going to parliament, it was because of Malema and the insults he hurled against Zuma.

“You see they painted Zuma as corrupt when he was innocent. I think he wants to raise a few points with ubaba before he makes an official public statement on the matter. I think he also wants to apologise and concede he made a mistake.”

ANC secretary-general Ace Magashule, a long-standing Zuma supporter, this week came out in defence of Zuma’s decision to defy the ConCourt order.

Only Zuma and Malema know the reason for an ‘urgent’ meeting, but the EFF faithful must be very confused
Opinion & Analysis
11 months ago