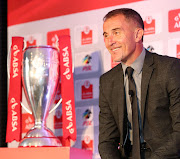 Orlando Pirates coach Milutin Sredojevic has said that his team’s 4-2 Absa Premiership victory against Chippa United in their last game proved what he has been saying about Bucs being a work in progress.

Pirates’ impressive form and positive football‚ and also just a general increasing dynamism in their style of play under Sredojevic‚ have raised hopes among Buccaneers fans of a victory in Saturday’s big Soweto derby against Kaizer Chiefs at FNB Stadium (kickoff: 3.30pm).

In particular‚ the six-goal thriller in Port Elizabeth against Chippa on Sunday has tongues wagging.

But Sredojevic said‚ if anything‚ the game‚ far from being convincing‚ proved that Pirates have much tightening up to do.

“It was not emphatic.

“As far as I understand emphatic is you score all these four goals in the first 15 minutes and then are waiting to the end.

“This is why we are really in a mood where we need to do things critically because it’s unacceptable for a team of our standing to concede two goals.

"And then it’s standard to score four goals.

“So‚ in looking at keeping the attacking part‚ and improving the defensive part‚ this is the formula that we are doing in the last polishing aspects for Saturday.”

Pirates have lost once in eight PSL games‚ winning six of those‚ to charge to second and sit just four points behind leaders Mamelodi Sundowns.