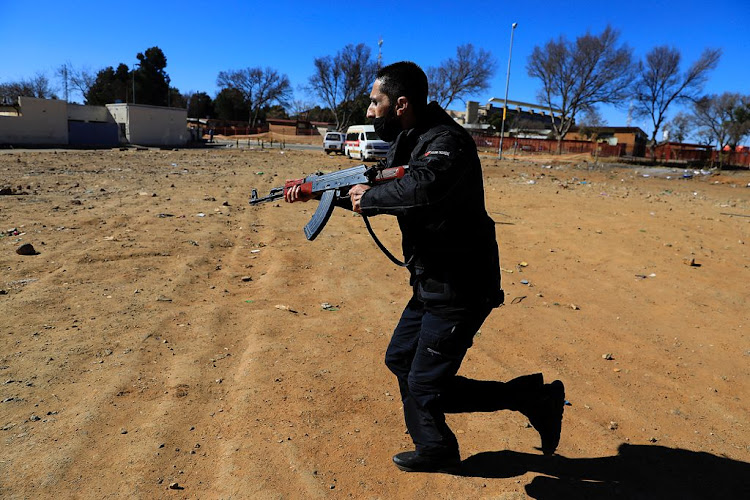 Parliament announced on Monday night that on September 23, Ramaphosa signed the bill, which seeks to strengthen control over the regulation of the private security industry, including security services rendered by SA to other countries.

The proposed law was passed by parliament in 2014, despite opposition from the industry, opposition parties and foreign embassies, who wrote to the police portfolio committee which was drafting the law. Its opponents warned that it violated the World Trade Organisation’s (WTO) General Agreement on Trade in Services and the requirements of the US African Growth and Opportunity Act because it would effectively result in expropriation and limit foreign investment.

The bill requires all security companies and manufacturers, importers and distributors of security equipment to be at least 51% owned by South Africans.

At the time, the police department argued that a restriction on foreign investment in a sector such as the private security industry was reasonable and justifiable in the context of broader national security, given the nature and scope of the industry, the technological advancements in the private security space and developments since September 11 2001.

The events of that day had had an impact on security concerns globally, with countries looking afresh at their intelligence, defence and security situations, government said. The police said at the time a recent trend in other countries was to totally prohibit ownership of private security companies by foreigners or restrict the extent of foreign participation and give a majority share-holding and control to its citizens.

When the bill was passed by the national assembly in February 2014, then police minister Nathi Mthethwa said it was necessitated by the tremendous growth of the private security industry since the promulgation of the principal act in 2001.

At the time, Mthethwa said there were more than 445,000 registered private security guards, compared with 270,000 armed statutory forces, which are the SA National Defence Force (SANDF) and the SA Police Service (SAPS) combined.

“As a result, members of the public are, on a daily basis, more likely to interface or come into contact with private security than they are with SAPS officers. SA currently has one of the largest private security industries in the world,” he said.

Mthethwa added that while the growth of the private security industry was not unique to SA, its growth in the country had outstripped other nations.

He said since the dawn of democracy in SA, the police had been under intense scrutiny by the state and public, and this was illustrated by the multiple oversight bodies and laws governing the police.

If private security firms leave - and some will after this bill is passed - there will be more demand on an already overstretched SAPS. In the end it will be the communities with the highest crime rate that will bear the brunt.

“This is not the case with the private security industry, whose accountability is purely market-driven. Both government and civil society have been concerned with the effective regulation of the industry and this amending bill seeks to address the challenges that have been experienced with regard to effective regulation,” said Mthethwa at the time.

Among the challenges, he mentioned a lack of resources, saying this compromised effective regulation, and the dependence of the regulator on the industry to fund its activities.

Mthethwa said there were issues regarding criminality in the private security industry and a growth of foreign-owned companies.

These had made it necessary for the government to tighten up the regulatory framework for the industry, he said.

On limiting the extent of foreign ownership, Mthethwa said it was necessary because the line between private security companies and private military companies was becoming increasingly blurred.

He said private security companies were also increasingly being used in the field of intelligence and that it would be irresponsible for SA not to take seriously these concerns and ensure domestic legislation protects national and security interests.

Regarding the 51% South African ownership, Mthethwa argued that “you cannot say that you need to transform this industry and talk about everything else, except for ownership”.

The DA warned that the bill would lead to disinvestment and job losses in an industry that employs hundreds of thousands of people.

“If private security firms leave — and some will after this bill is passed — there will be more demand on an already overstretched SAPS. In the end it will be the communities with the highest crime rate that will bear the brunt,” said DA MP Dianne Kohler-Barnard.

Embassies, including that of the US, wrote to parliament expressing concern about the bill, she told the national assembly at the time.

At its December 2017 national conference, the ANC resolved that the bill should be enacted and implemented expeditiously and that regulations setting out minimum requirements for the registration and certification of security personnel be developed.

The party also called for restrictions on the use of private security companies to protect state-owned national key points.

SA 'scarily' at risk from cyberattacks

Dr Mpho Phalatse was minding her business as a casualty officer at Alexandra's Masakhane community health-care centre when she underwent her ...
News
9 months ago

Even before this week's decision by President Cyril Ramaphosa to institute an inquiry into Khehla Sitole's fitness for office, his position as ...
Opinion & Analysis
9 months ago
Get the Sunday Times Daily app or daily email newsletter