Image: GCIS Cyril Ramaphosa addressing the nation in the shirt that caused a stir.

When President Cyril Ramaphosa wore a flamboyant black and white shirt at a recent “family meeting” to announce SA’s move to lockdown level 2, it wasn’t the easing of restrictions that caused comment as much as his bold attire.

Ramaphosa’s new look immediately trended on social media. Many ridiculed him for his choice of shirt and accused him of trying to emulate Nelson Mandela’s iconic look to convince South Africans to vaccinate.

The loose-fitting, patterned shirt had been popularised by Mandela, who was often seen at formal affairs in his casual look.

“My kids laughed when they saw him with this shirt. They asked me what was wrong with Cyril, why is he trying so hard to look like Mandela?” said one Twitter user after Ramaphosa’s television appearance.

One South Africa Movement leader Mmusi Maimane also jumped on the bandwagon, jokingly saying he could no longer wear his favourite shirt as it bore a resemblance to the president’s.

Sonwabile Ndamase, the designer of the Madiba shirt, is not fazed by critics of the Ramaphosa look.

“I’ve made quite a number of shirts for him. He has worn the shirt to previous events. I think it’s just now that people took notice of it.

“I think he was making a statement for the start of Heritage Month.”

Ndamase said Ramaphosa became familiar with his work through their engagements over the years.

“His secretary called me about three years ago. I had to go and take his measurements. I went to the headquarters of the ANC where he gave me about 30 minutes of his time to discuss what he wanted. He told me I needed to deliver those shirts with immediate effect.

“The president went for more neutral shirts, more along the lines of the Madiba shirts. I did incorporate a bit of his Venda background with the pink on the pockets of the shirt he wore when he addressed South Africans.” 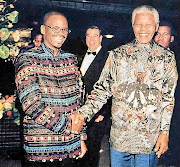 For Ndamase, the fact that his designs have again become a talking point is a positive development because it stimulates conversations about origins, local design and heritage.

“I saw the comments on social media and laughed.

“One thing that I love about my country, which I will never trade for anything, is that in any adversity there is always a lining of humour.

“If you are a sensitive person, then you don’t belong to this country. You can’t take these things personally but with a pinch of salt.

“Some young people said that when they saw the president dressed in that shirt it signified the end of Covid-19 … it symbolised freedom.

“Dressing Afrocentric has got a way of teaching us that our roots are very important. We haven’t yet moved away from the tree of origin. We are still holding onto who we are as Africans.

“Africanism has a way of making people feel at ease with themselves and that’s how the president came across, not tense but just relaxed in his attire.”

Durban-based designer Haroun Hansrot agreed that Ramaphosa’s choice of shirt for the broadcast was a positive move.

“To say that he surprised us all with his attire is an understatement! His relaxed look and attitude was reassuring to the South African public. It conveyed his message on the relaxing of the lockdown measures much better.

“His formal attire in previous family meetings reinforced the urgency and seriousness of the Covid situation.

“The message could also be that he is adopting the Madiba look and making himself more amenable and approachable to the people of South Africa,” said Hansrot.

Ndamase has been nominated for a Most Influential People of African Descent award, to be held virtually next month.

Each year 100 outstanding personalities and high achievers of African descent around the world are recognised for their positive contributions to the world.

Ndamase’s Madiba shirts are as popular as ever, with thousands being sold since Mandela’s death in 2013.

After Nelson Mandela was released from prison, Giorgio Armani reportedly offered to dress him. But for the freedom fighter to endorse an Italian designer symbolising elitism and extravagance would have been contrary to everything he had devoted his life to.

Image: Arena Holdings archive Nelson Mandela in one of his trademark Madiba shirts.

Instead, he focused on suits by his longtime tailor Yusuf Surtee, and his trademark Madiba shirt.

The story goes that Mandela was given some shirts by  president Suharto of Indonesia in October 1990 and he liked them. The fabric was batik, decorative and distinctly un-Western, in natural fibres.

Surtee, whose father had made clothes for Mandela before his imprisonment, told a journalist in 1996: “He wanted to identify with his people, and the majority never wore suits.”

As a lawyer and prominent member of the ANC in the 1950s, he had worn beautiful bespoke suits in the Savile Row tradition.

He was keenly aware of the symbolism of dress and for his trial in 1962 he drew on his roots, wearing his emblematic Thembu kaross and beaded necklace.

“That day, I felt myself to be the embodiment of African nationalism … the kaross (given poignancy by being a bedspread) was a sign of contempt for the niceties of white justice. I knew well the authorities would feel threatened by my kaross as so many whites felt threatened by the true culture of Africa,” he wrote in his autobiography, Long Walk to Freedom.

The original Madiba shirt — known as the “fish shirt” — was designed by Desré Buirski Nash.

In 1994, she gave a gift of a hand-printed batik shirt to Mandela’s bodyguard, with a note reading: “Thank you for everything you have done and the sacrifices you have made for our beloved country.” Mandela wore the shirt the next day to the rehearsal for the opening of parliament, and a picture of him in it appeared on  the front page of a local newspaper.

Sonwabile Ndamase became Mandela’s shirtmaker in the late 1990s while he was dressing Winnie Madikizela-Mandela and her daughters, who introduced him to “Tata Madiba”.

“Tata gave me the brief on how and what he would like to wear,” he said at the time. “After years of breaking stones on Robben Island, the alkaline dust had taken its toll on his health. He needed something cool to the body, easy to wear, but as he called it, ‘well-behaved’.”