Skolopad wants to work with Zodwa, but Zodwa only works for cash 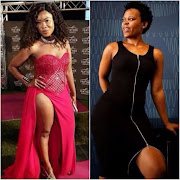 Image: Via TshisaLIVE Will Skolopad get her wish to co-headline a women's event with Zodwa Wabantu?

Just like the nursery rhyme you just sang as you read that first sentence, Skolopad's wish for a co-concert was dismissed as childish by Zodwa Wabantu.

The back story: Skolopad and Zodwa sort of came up in the industry at the same time. Apparently the attention from fans wasn't enough for both of them so a beef was formed. However it is fair to point out that Zodwa Wabantu tried multiple times to "distance" herself from the beef while Skolopad kept insisting it wasn't beef she was after, but "professional courtesy" and friendship.

Skolopad had an idea as she was chilling in her house. She said that to demonstrate that women can work together, it would be awesome to co-headline a concert for women with Zodwa in August.

With that, she took to Twitter (as they all do) to tag Zodwa in a mini proposal to hear her thoughts.

Anyway... that didn't bother good ol' Skolie that much. She knew the message would reach Zodwa eventually and it did.

Speaking to TshisaLIVE, Skolopad said she thought the two of them, on one stage, performing for a crowd full of women, would be brilliant and iconic to say the least.

"I know what has been said before but when I thought about me. Me and Zodwa being the headliners of a concert created by women for women would be great. I say this because both of us have a large female following. So when I thought about it I felt like we world shine so much brighter together and we'll invite other women to come perform too. Wouldn't that be nice? I mean we are not fighting each other mos, just building."

Can you guess what Zodwa said?

The performer gave her reasons to TshisaLIVE, explaining that besides thinking that Skolopad hasn't thought this through, she doesn't think she can afford her time.

"Ah Skolopad again? I really don't want to say much here because this will end up looking like I am against that women and other women as well and that's not the case. I've said and asked Skolopad numerous times to leave me alone. It's not beef, its just me trying to stay away from a person I feel doesn't have my interests at heart and has parasite tendencies. I really feel like I should be left alone to slay in my own lane, as I am."

Zodwa said it wasn't that the idea was bad, her issue was she believed Skolopad just went on a whim and doesn't actually have a plan in place.

"I also don't think she's planned anything. I think she just came up with the idea and threw it on social media. Does she have a budget? Does she want to book me? If yes, can she afford me? If she wants both of us to plan it what is she bringing to the table? I am a really busy woman, like, I'm going to the States next month."

However, don't despair wena Skolopad, Zodwa said if you bring her and her management a plan on paper, she might change her mind.

Would you pay to go to a concert where the headline acts are Skolopad and Zodwa Wabantu?