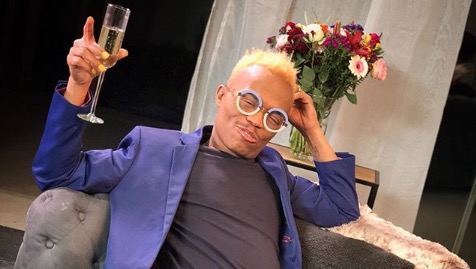 Somizi is currently consulting with his legal team on the matter.
Image: Via Instagram

Idols SA judge and radio personality Somizi Mhlongo is taking action after he was the target of a racist tweet earlier this week, despite claims that the account holder's account was hacked.

The tweet, which used the K-word to address Somizi, caused widespread outrage on the social media platform. It was issued from an account in the name of Lia Meyer.

Somizi told TshisaLIVE he was determined to take action.

"I am speaking to lawyers right now and they will advise on what steps I need to take. I am not letting this one slide."

He added: "With regards to her claiming the account had been hacked, until [it is] proven … which we will also go deeper into investigating, I’m not letting it go. I am carrying on with the charges."

Somizi said he wanted to teach racists there was no place for them in society and that no form of racism could be tolerated.

"There is no place for racists in South Africa, or anywhere else in the world for that matter, so we have to continue teaching people a lesson and making an example because definitely someone out there will know that this can’t be tolerated and shouldn’t have been tolerated in the first place."

Lia's best friend Hannah Gauché told TshisaLIVE that Lia was not ready to speak to the media and that she had asked for her privacy to be respected.

Hannah said she understood why Somizi was appalled by the "racist and homophobic tweet", but believed he could have handled the situation better.

"I firmly and unquestionably stand against racism. My biggest problem with the situation is how he handled it. He is a public figure with a lot of people who look up to him and support him. I think he should have either tried to reach out to her first or he should have gone straight to the police and filed a report."

Hannah said police would have been able to investigate the hacking claim, but asking fans to find Lia had put her safety at risk.

"I stand by Lia and who she is as a person. I know that she is not irrational enough to risk her future and her happiness for a tweet which promotes intolerant views that are not her own."

*UPDATE: This article has been corrected to reflect Lia Meyer is not a student at University of Pretoria. TshisaLIVE apologises unreservedly.

Dbn Nyts on losing members: It took its toll but we're stronger now

The group want to prove Shumaya wasn’t a fluke.
TshisaLIVE
4 years ago

My vagina. My rules - Bonang has a word for those coming for her love life

OPINION | Are we really going to sweep this slay queen issue under the rug?

Why do we wait for them to be #Missing or worse #RIP on Twitter?
TshisaLIVE
4 years ago