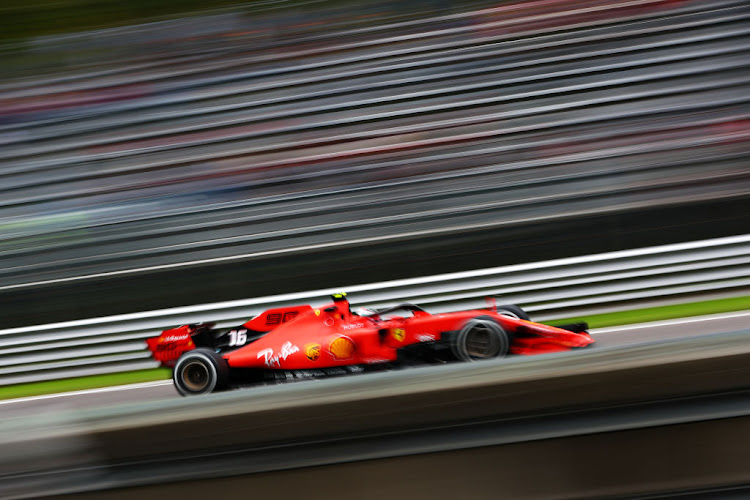 Charles Leclerc of Monaco driving the (16) Scuderia Ferrari SF90 on track during practice for the F1 Grand Prix of Italy at Autodromo di Monza on September 06, 2019 in Monza, Italy.
Image: Photo by Dan Istitene/Getty Images

Charles Leclerc set the pace in practice for his Ferrari team's home Italian Grand Prix on Friday with Formula One world champion Lewis Hamilton hot on his heels for Mercedes.

The 21-year-old Monegasque led both sessions at Monza, the soggy and crash-strewn first one hardly representative after heavy overnight downpours while showers returned in the afternoon.

Fresh from his first F1 victory last weekend at a Belgian Grand Prix overshadowed by the death of French Formula Two racer Anthoine Hubert, Leclerc lapped the 'Pista Magica' with a best time of one minute 20.978 seconds.

The youngster had led the first session timesheets with a time of 1:27.905 and is hitting a fine run of form after also dominating practice at Spa-Francorchamps and taking pole position.

Ferrari and Monza are both celebrating 90th anniversaries this weekend, with a big crowd already on Friday and the grandstands festooned with red and white banners.

Charles Leclerc again set the pace for Ferrari as the Italian team led a crash-strewn first practice for their home grand prix at a soggy Monza on ...
Motoring
1 year ago

Ferrari have not won at Monza since Spaniard Fernando Alonso in 2010 but hopes of ending that drought are high at a circuit that suits their car's characteristics, although rain is expected.

The morning featured three red flags and saw McLaren's Carlos Sainz and Lando Norris second and third on the timesheets, positions the once-dominant team can only dream of in races at the moment.

Hamilton, last year's race winner to boos from the unhappy crowd, was fourth in the morning with Vettel only eighth quickest and 2.6 seconds off the pace.

Alfa Romeo's former Ferrari driver Kimi Raikkonen and Racing Point's Sergio Perez both crashed in the treacherous conditions while others spun, including Bottas who ended the first session ninth fastest but was fourth after lunch.

In this episode, the guys talk to Concours SA winner Vic Campher about what went into restoring his beautiful 1971 Dino 246 GT.
Motoring
1 year ago

Raikkonen was first off at Parabolica with half an hour completed, while Perez hit the wall heavily at the Ascari chicane.

Toro Rosso's Pierre Gasly caused the final red flag when his car hit a kerb at the first chicane and briefly caused an obstruction, before being shoved clear by marshals.

British-born Thai racer Alexander Albon, who has traded places with Gasly, was fifth and sixth fastest for Red Bull in the respective sessions.

Team mate Max Verstappen, who will drop to the back end of the starting grid due to engine changes along with Gasly and Norris, was fifth in the second session.

Neither McLaren featured in the afternoon top 10, with Norris sidelined for all but the last 20 minutes due to an oil leak that took time to fix.

Lewis Hamilton emphasised his loyalty to Mercedes on Thursday while leaving open the possibility that he might one day be tempted to race for Formula ...
Motoring
1 year ago

Ferrari and Monza celebrated their 90th anniversaries in style on Wednesday with Formula One providing the icing on the cake with a new contract ...
Motoring
1 year ago