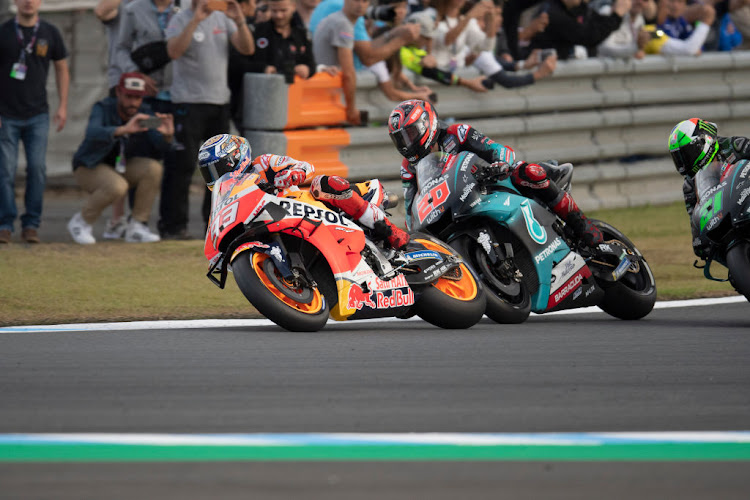 Marc Marquez of Spain and Repsol Honda Team leads the field during the MotoGP of Japan last year. The 2020 race has been cancelled.
Image: Mirco Lazzari gp/Getty Images

Japan will not have a MotoGP round for the first time since 1986 after organisers on Monday cancelled the race on 18 October  at Motegi due to the Covid-19 pandemic that will keep the series in Europe until mid-November.

The race is a home one for champions Honda as well as manufacturers Yamaha and Suzuki. It is the sixth on the 2020 calendar to be cancelled.

Carmelo Ezpeleta, chief executive of promoters Dorna, said in a statement that the championship would focus on doing as many races as possible in Europe until mid-November.

"Overseas events, if at all possible, should be scheduled after mid-November, which would be too late in the year for the Grand Prix of Japan to be held," the Spaniard said.

Kaoru Tanaka, president of circuit managers Mobilityland Corporation, said the situation in Japan and Europe was too unpredictable.

"The extension of the international travel ban is expected. As a result of our discussions with Dorna we agreed we have no choice but to cancel the Japanese GP in order to complete the season."

MotoGP is hoping to begin racing in Spain, which usually hosts four rounds of the championship, at the southern Jerez circuit in July.

Germany, the Netherlands, Finland, Britain and Australia have all been cancelled while France, Italy and Catalunya (Barcelona) have been postponed.

Six times Formula One motor racing champion Lewis Hamilton has criticised his sport for its silence on the killing of George Floyd, an unarmed black ...
Motoring
1 year ago

A Formula One proposal for an experimental reverse-grid qualifying race when Austria hosts two grands prix in July looks unlikely to be accepted due ...
Motoring
1 year ago