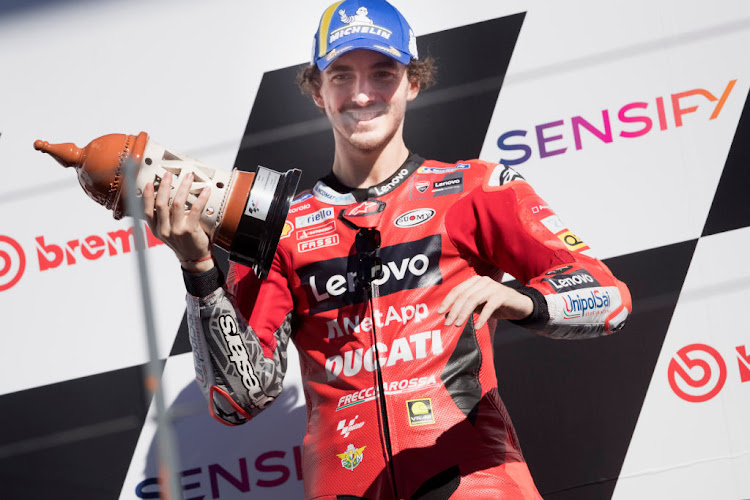 Ducati's pole sitter Francesco Bagnaia produced a near-flawless display at the Algarve Grand Prix on Sunday to claim his third victory of the season, finishing ahead of Spain's outgoing champion Joan Mir of Suzuki and team mate Jack Miller.

Italian Bagnaia, who was starting first on the grid for a fifth straight race, overcame a minor early blip in which he briefly lost the lead before crossing the line in dominant fashion in the penultimate race of the season.

"This race was maybe at the start more difficult because I was struggling with the front tyre as compared to other races... but everything became better and I'm very happy to have won," Bagnaia, who sealed second spot in the championship, said.

"... It's a great base for next year because we have worked so hard with our bike."

Yamaha's new world champion Fabio Quartararo – who clinched the title at last month's Emilia Romagna Grand Prix – began his reign in disappointing fashion as he crashed out with five laps to go in the race.

It was the first time that the consistent Frenchman had not finished a race this season and capped off a disappointing weekend in which he also struggled in qualifying.

Miller lost pace with 15 laps to go and was overtaken by LCR Honda's Alex Marquez, who made up five places in search of his first podium this season, but the Australian regained ground to take third and help Ducati claim the constructors' title.

The race ended in anti-climactic fashion shortly before the finish with a red flag being waved after a bad crash involving Iker Lecuona of Tech3 and KTM's Miguel Oliveira at turn 13 but both were conscious as they received medical attention.

Red Bull's Max Verstappen celebrated a dominant win in the Mexico City Grand Prix on Sunday to surge 19 points clear of Lewis Hamilton in the Formula ...
Motoring
4 weeks ago

Japanese rookie Yuki Tsunoda drew fire from his employers Red Bull on Saturday after knocking Formula One championship leader Max Verstappen off his ...
Motoring
4 weeks ago