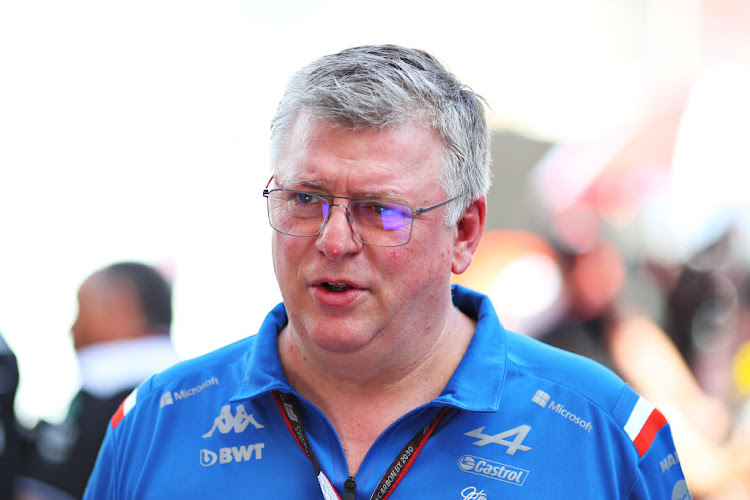 Otmar Szafnauer, team principal of Alpine F1, says he thought the team was on the verge of signing with Fernando Alonso.
Image: Eric Alonso/Getty Images

Alpine Formula One team principal Otmar Szafnauer only learnt about Spaniard Fernando Alonso's move to Aston Martin when he read the press release, he said on Tuesday.

Twice F1 world champion Alonso signed a multiyear contract with Aston Martin on Monday, joining them as a replacement for German Sebastian Vettel, who last week announced his retirement from racing at the end of the season.

Alonso's decision to join Aston Martin came as a surprise to Szafnauer, who was confident Renault-owned Alpine had been on the verge of signing the 41-year-old driver to a new contract.

"It was the first confirmation I had," Szafnauer said. "Obviously, when we're in the paddock, there's all sorts of rumours and I had heard rumours that Aston were interested.

"Once you hear that they're interested, there's probably discussions that took place ... But I was confident that, even with the discussions, and there's nothing wrong with exploring, that we were very close.

"So yes, the first confirmation I had was the press release. I did ask the question (to Alonso) and I was told: 'No, no, I haven't signed anything.' So I was a bit surprised."

Szafnauer said Alpine had offered Alonso a contract extension which would have guaranteed him a seat for the 2023 season, with an option to extend for another year.

"We offered a one-plus-one deal. And we discussed with Fernando that: 'Look, if next year at this time you're performing at the same level, of course, we will take you and that could have carried on'," he added.

"But I think he wanted more certainty independent of performance: 'I want to stay for longer.' And I think that was the crux of the going one plus one as opposed to two plus one or three plus one, or three years."

The Grand Prix will mark the first time the MotoGP calendar has begun in Europe since 2006, MotoGP says.
Motoring
1 week ago

Fernando Alonso's switch from Renault-owned Alpine to Formula 1 rivals Aston Martin in 2023 came as a surprise announcement on Monday but it also ...
Motoring
1 week ago

Verstappen's second F1 title is merely a matter of when

Max Verstappen can enjoy Formula One's August break knowing that it is now surely a question of where he wins his second title rather than whether.
Motoring
1 week ago