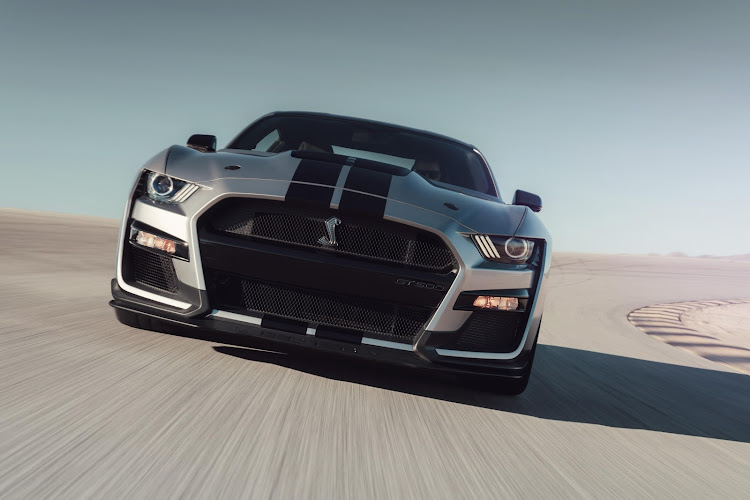 Ford has uncovered a hardcore Shelby GT500 version of its Mustang at the Detroit motor show.

It’ll be the most powerful street-legal Ford yet produced when it reaches production in 2020. Ford Performance is keeping official output figures close to its chest and is only willing to declare that the hand-built and supercharged 5.2l V8 engine will kick out ‘more than 522kW’ of power.

Ford says this Shelby will sprint from standstill to 100km/h in an estimated 3.5 seconds and it blazes the 400m mark in fewer than 11 seconds. There is no indication of how fast it will go flat-out but it should be at a sniffing distance of the 280km/h mark. In cobbling together this new bruiser Ford has borrowed some tech from the  Ford GT supercar as well as some know-how gained from building its racing Mustang GT4 car.

The GT500 will debut a Tremec-sourced seven-speed dual-clutch automatic gearbox, a first for the Mustang range, which allows launch control and line-lock, the latter feature enabling the locking up of the front wheels while freeing up the rears for a proper and smoky rubber-braai.

Ford also says the car boasts the largest front brake discs of any other American sports coupe, with a diameter of 420mm. Additional mechanical marvels found in the Shelby include turning of the 2.65l roots-type supercharger upside down, within the V of the aluminium-alloy block engine equipped with high-flow cylinder heads and larger forged connecting rods. This trick helps cool intake air while simultaneously lowering the engine’s centre of gravity. 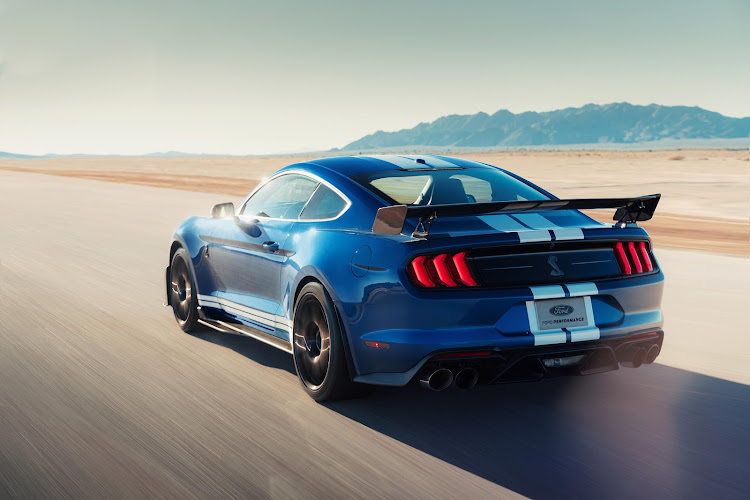 Gone in 3.5 seconds: supercharged 5.2 V8 coupe is the latest incarnation of "Eleanor", the famous Mustang from 'Gone in 60 seconds'.

With all of this mechanical expertise Ford promises less Youtube oversteer bloopers and more smiles on the track for the model destined to be top of the pony-car pile when it arrives in 2020. Two packages of varied handling capability will be available.

A Handling Package brings with it Michelin Pilot Sport 4S rubber, adjustable strut top mounts and a spoiler with a Gurney flap. The top-spec alternative is a Carbon Fibre Track Package which adds 20-inch carbon-fibre wheels, race track-approved Michelin Pilot Sport Cup 2 rubber and an adjustable carbon-fibre GT4-spec wing and splitter. Also with this pack the rear seats are removed for weight reduction.

Despite a sporting bent the interior reveals everyday living amenities. There is fitment of a full-colour LCD instrument cluster and a thumping 12-speaker Bang&Olufsen audio system. Exposed carbon fibre decorations can also be ticked off as ‘Dark Slate Miko suede’ door inserts, Recaro racing seats with a racing harnesses. There is also a choice of new paint colours between Red Hot, Iconic Silver and Twister Orange as well as painted stripes to finish off the iconic signature look of a Shelby.