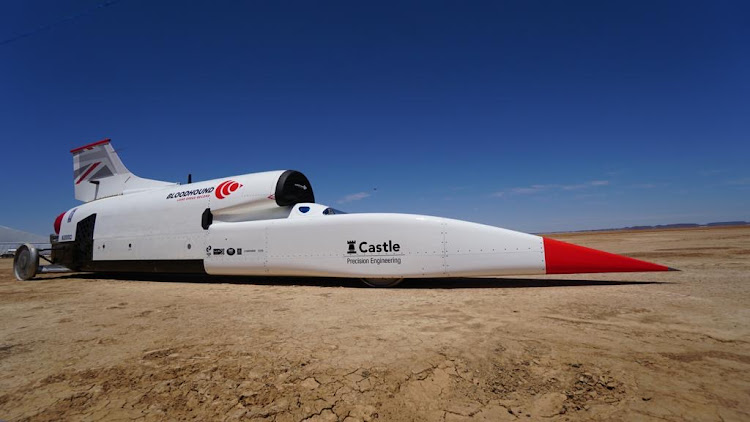 After years of delays, Bloodhound finally arrives at Hakskeen Pan in the Northern Cape.
Image: Supplied

The Bloodhound Land Speed Record (LSR) team has touched down in SA to begin its high-speed testing programme at Hakskeen Pan in the Northern Cape.

The rocket- and jet-powered Bloodhound car, with driver Andy Green at the wheel, aims to beat the existing 1,228km/h record set by Green in the US in 1997 in a car called Thrust SSC, becoming the first land vehicle to officially break the sound barrier. Bloodhound's ultimate target is to reach 1,000mph (1,610km/h).

The much-delayed project, which was rescued from bankruptcy last year, will initially begin testing on Hakskeen Pan’s 16km desert track at speeds up to 800km/h.

The first session will be to test the precision machined solid aluminium wheels, which were made specially to withstand the stresses of traveling at supersonic speeds.

The world’s fastest straight-line car, powered by a jet engine from an EJ200 Eurofighter Typhoon, was rolled out at the Bloodhound technical camp on the edge of the Hakskeen Pan desert, and presented to Northern Cape premier Dr Zamani Saul.

One of the key objectives of the high-speed testing programme is to evaluate how the car behaves when slowing down and stopping from a number of target speeds, building up to and beyond 800km/h. Only once engineers and Green are satisfied they understand the drag and stopping ability of the car will they push to the next run profile, building speed in each run by increments of 80 km/h.

The team will examine how much drag the car creates in a number of scenarios and at various speeds, using the wheel brakes, one or both of the drag parachutes, and with the giant air brakes locked into position.

Data from 192 pressure sensors on the car will be monitored and compared against the predicted computational fluid dynamic models to ensure they match up.

This data is critical to determine the size of the rocket that will be fitted to the car for the attempt to set a new world land speed record in 12 to 18 months’ time.

The Northern Cape government and members of the local Mier community undertook the painstaking process of removing 16,500 tons of rock from 22 million square metres of Hakskeen’s dry lake bed to ensure the Bloodhound car can run smoothly and safely.

It’s the largest area of land ever cleared by hand for a motorsport event, and the feat was recognised by the FIA motorsport governing body in 2016.