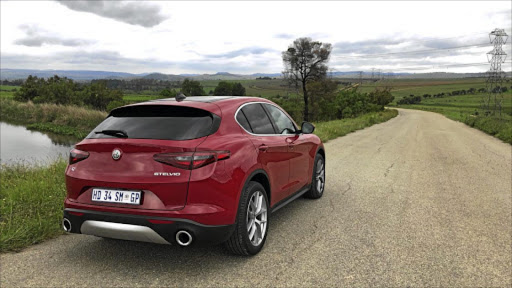 Stelvio
We have probably said this before, but what’s going on with all the SUVs?

Not so long ago, environmentalists decreed them evil and their numbers looked set to dwindle. But then they fought back and they fought back hard. Now everyone has an SUV — even Lamborghini.

SUV sales are on the rise everywhere, even in European cities with narrow cobbled streets where you’d think everyone should be driving a Smart. But no, they are in SUVs with five kids, a dog and a rear seat entertainment system.

There are grey areas to the rise of the SUV — when is a small SUV actually a crossover and all that — but generally it has become one of the most competitive spaces in the market.

Which is why Alfa Romeo wants in. Like the SUV, the Italian marque is making a comeback. Its Giulia sedan has been widely acclaimed around the world in spite of some typical Alfa issues. And from the Giulia comes the Stelvio SUV, which sits on the same Giorgio platform that will spawn yet more Alfas and probably a couple of Maseratis too.

It’s not easy to take traditional brand looks and translate them into a new genre, but Alfa’s design team have done a good job with the Stelvio. The styling is simple and uncluttered, in typical Alfa style. Everything is dominated by the hallmark Alfa grille which is the main giveaway, because to non-Alfa people, the Stelvio might not stand out.

Things get more involved at the rear though, a place where Alfas have typically been clean and unfussy. It’s different but we think it works well.

No surprises that the interior is basically all Giulia with the addition of a hill descent control button on the multifunction steering wheel. There are a couple of trim differences too and the boot also shows how much attention was paid to the back of the car. Inspection of the rather posh, embroidered strap to lift the cover over the spare wheel revealed the cover itself is dual purpose. It’s carpeted on one side to give the plush look, but turn it over and there is a grippy, nonslip surface to prevent your shopping moving around or the dog sliding into the rear window and mimicking a Garfield in a Citi Golf ad. There’s some attention to detail going on here.

That detail continues in the way everything feels. The gearshift paddles are not some naff plastic, they are real metal. There is no clutter on the centre console, only a minimalist look with three main dials that feel solid, useable even.

So the Stelvio scores well on the design front, but it’s an Alfa so it’s all about the drive.

Stelvio is the name of a famous mountain pass in the Alps, so naturally one would expect this SUV to be at home on coiling tarmac being hustled along by an enthusiastic driver with everything set to dynamic mode.

Yes and no. The Stelvio is superb on the twisty stuff and comfortable on the urban commute. The driving position is excellent and apart from a bit of delay on the throttle, it generally responds with the right dose of enthusiasm depending on what mood you are in.

Strangely, it is not the urban commute or even the twisties where the Stelvio not only exceeds expectations but totally relegates almost every other SUV to parking in a field. Gravel roads. Yes, seriously, gravel roads. The Stelvio is probably the best SUV we have driven on a gravel road. Take note if you live in the mountains of the Western Cape or other areas where the commute is on gravel.

Because the suspension on the Stelvio soaks everything up better than a Land Rover and it handles on the loose surface better than a BMW X3 or a Porsche Macan. It’s almost as though this was the first priority in the engineering brief. Its Q4 all-wheel drive system even handles a bit of mild rocky stuff, but any serious off-road SUV is going to kick it into touch here.

The Stelvio is rather good. It excels in areas we did not expect and has loads of typical character about it. At R946 000 for the limited First Edition we had on test, it’s not cheap, in fact, it’s more expensive than most of its rivals, but for those seeking something different the Stelvio is surprisingly impressive. – Mark Smyth (Pics: Mark Smyth)