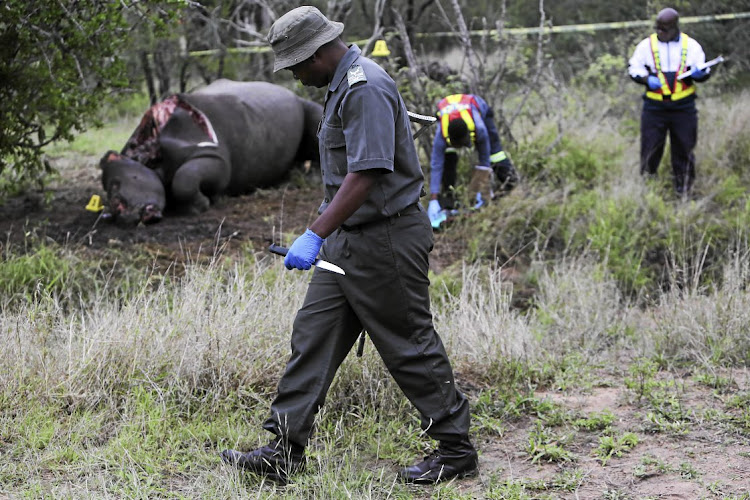 Members of a forensics team perform an autopsy on a rhino killed for its horn in the Kruger National Park.
Image: Alaister Russell

Instead of clamping down on community members and syndicates who poach rhino in the Kruger National Park (KNP)‚ some rangers are collaborating with poachers‚ according to South African National Parks (SanParks).

“We unfortunately have crooks‚ like in any other organisation‚” said Glenn Phillips‚ SanParks’ managing executive. He added that SanParks is aware of collaboration between some staff members and poaching syndicates‚ and that “our investigators are working very closely with the police” to identify these people and bring them to book.

His remarks follow the arrest of three alleged rhino poachers – Walter Mhangani‚ 55‚ Emmanuel Mdhuli‚ 29‚ and Xongani Mathebula‚ a Mozambican whose age is unknown – found in possession of horns in KNP on Sunday.

“We will continue with ongoing investigations [to root out suspects] in the park – because we cannot afford to have people working for us and being part of syndicates‚” Phillips said.

Although he did not allege that these three specific suspects had collaborated with Kruger staff‚ he suggested that other staff members were assisting poachers to gain entry to the park illegally.

“We also have situations where people drive in as tourists‚ but they are actually going to poach. We have to find a balance between creating a service attitude at the gate for tourists‚ [and facilitating effective security by the] police and the army‚” he said.

Phillips added that it was unfortunate that the syndicate kingpins never get arrested; the suspects usually netted are the low-level poachers who desperately need money‚ but end up putting their own lives and families at risk.

“This is an organised-crime situation‚” Phillips explained. “The people who have been arrested or killed are just foot soldiers‚ who have been sent in with a promise of easy money – but [their arrest] doesn't only impact on them; it is also very difficult for their families.”

In July last year‚ regional ranger Rodney Landela and his co-accused‚ Kenneth Motshotsho from the KNP’s veterinary science department‚ were linked to a rhino poached in the Kingfisherspruit area.

Both its horns had been removed.

It was reported that a SanParks firearm had been used in the poaching. The two were connected to the poaching after bloodied shoes were reportedly found in the vehicle Motshotsho was driving.