FILM REVIEW: Formula One face off 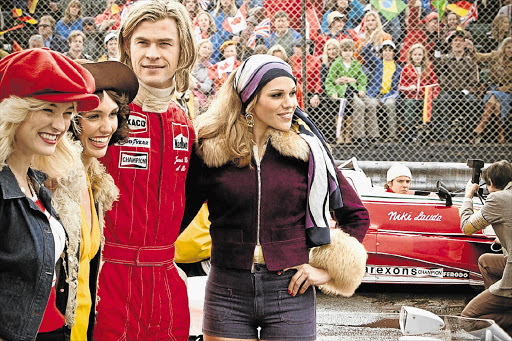 FRENEMIES: Chris Hemsworth stars as James Hunt in 'Rush', which tells the tale of his fierce rivalry with Niki Lauda in 1976

'Rush' is the best movie made about motorsports, writes Tymone Smith

Petrol heads and I don't agree on most things. I find it hard to get excited about engine noises and horsepower comparisons, and I think flip-up headlights are the stupidest things imaginable.

However, this good old-fashioned story of two very different yet equally determined men and their rivalry on the tracks of the Formula One circuit in the 1970s proves to be thrilling, hard-to-look-away-from stuff for even the most disinterested viewer.

This is thanks to a strong script by Peter Morgan, excellent performances by the leads, focused direction and innovative cinematography.

Concentrating on the rivalry between playboy James Hunt (Hemsworth) and the earnest Austrian, Niki Lauda (Brühl), Rush is easily the best movie ever made about motorsports.

Hunt was a carefree good-time Charlie with a love of sex, booze and drugs, and a man to whom people were drawn. Lauda was a brusque, early-to-bed type, good with cars but terrible with people.

They competed against each other in the classic 1976 F1 season during which Lauda almost died when his car went up in flames on the Nürburgring in Germany, causing severe damage to his face but not to his determination to beat his rival.

As the two drivers face off in the final race in the shadow of Japan's Mount Fuji in some of the worst weather conditions imaginable, look around the cinema and see if anyone is not sitting up straight on the edge of their seats.

Off the track Hunt and Lauda were more frenemies than rivals, but on the track all bets were off and each man's determination to win overtook whatever was going on in their personal lives.

Morgan's script gives plenty of time to both men, creating well-rounded characters rather than simple cut-outs, but it is Lauda, his courage in the face of tragedy and his brusque attitude, who proves the more psychologically interesting of the two.

Using the skills of ground-breaking cinematographer Anthony Dod Mantle, Howard gets inside the cars and brings us as close as possible to the experience of driving them. He almost puts the audience right there in the stands, smelling the fumes and the burning rubber.

It's not the deepest film you'll see this year but it certainly is a refreshingly well-told, well-acted and well-made blockbuster about men and their toys that, unlike watching today's F1 on TV, won't put you to sleep.

Finally we have the Formula One story that is not just for petrol-heads. - David Gritten, The Daily Telegraph

It rarely deviates from formula, but 'Rush' wins big, delivering the most exciting F1 footage created for film. Like Hunt, it is sexy, funny, full of thrills. Like Lauda, it is intelligent, a bit blunt, but ultimately touching. - Ian Freer, Empire

'Rush' which is serious without being self-serious, fun without being trivial, feels like the movie that [Ron Howard] has been waiting to make his whole life - it's no wonder he climbs into the cockpits with the camera again and again. - Manohla Dargis, New York Times