Tata tattoos the latest mark made by Madiba 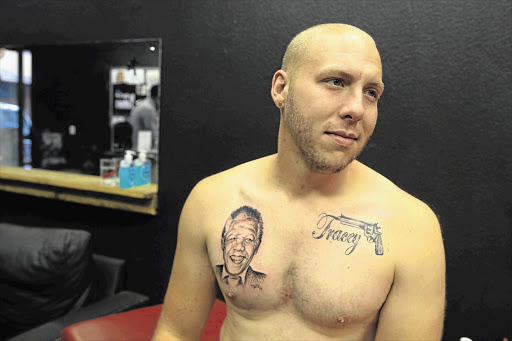 OTHER LOVE: David Holland, 26, chose to get a Mandela tattoo by artist Tiplo Tsotetsi in Rosebank Picture:
Image: KATHERINE MUICK-MERE

Madiba is still leaving his mark on his people.

Some people are now inking former president Nelson Mandela's image onto their skins forever, joining all the streets, bridges, schools and universities that proudly carry his name.

David Holland, who was born in Zimbabwe but moved to South Africa in 1993, yesterday had an image of a smiling Nelson Mandela tattooed on the right side of his chest.

Holland said Mandela meant a lot to him and he felt he had to get something tattooed on his body in tribute.

"Where I came from there was no separation, and in 1993 when I moved here I saw no black people in our area. I thought that was very strange," he said, adding Mandela influenced his life greatly.

"My business partner is black; I'm getting married to a girl who isn't white. He played a huge role in making that possible," he said. "He made it okay to be together and realise we are just people."

Holland said when he heard the news just before midnight last Thursday that Mandela had died, he knew Mandela "deserved a piece". He originally went to Tiplo Tsotetsi, the owner of Black and White Tattoos in Rosebank, with the idea of getting the words "submit or fight" in the ANC colours, but decided on a portrait.

"We had to decide if we wanted to use a picture of him smiling and with his eyes squinted, or where he was posing, like on the Time magazine cover," Holland said. They decided on one of Mandela smiling.

Tsotetsi said yesterday he was doing the tattoo for free, "as a tribute for Mandela".

He said he felt no pressure doing the Mandela portrait, even though it was the first time he had done anything like it. He has applied Mandela quotes in the past and is expecting demand for all types of Mandela tribute tattoos to pick up in the coming weeks.

Just before Tsotetsi started with the tattoo on Holland, he jokingly said: "Tiplo, the owner of Black and White Tattoos in Rosebank. See what Mandela did for us."

After close to three hours of tattooing, Holland's piece was complete. "The pain was intense ... it hurt, but in the end it is worth it."