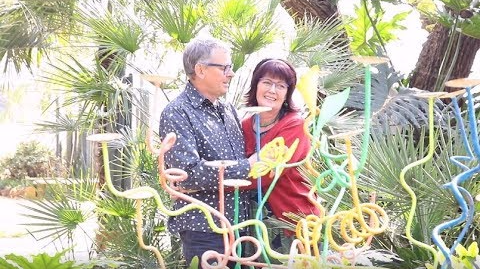 Jules Stobbs and his partner Myrtle Clarke, commonly known as the "dagga couple" are fighting for the legalisation of Marijuana in South Africa. File photo.
Image: Screengrab via YouTube/TimesLIVE

The trial of the dagga plant has been postponed‚ bringing it to an end a week early.

Johannesburg residents Jules Stobbs and Myrtle Clarke‚ nicknamed the dagga couple‚ have asked the high court in Pretoria to find the ban on adult dagga use unconstitutional and to instruct parliament to make new laws reflecting this.

The trial started on July 31 and was set to run until August 25‚ but Stobbs and Clarke's legal team received thousands of pages of new evidence from the state and Doctors for Life.

The evidence was due at the end of March this year‚ but was introduced during the past week.

Stobbs described the new evidence as a "stalling tactics" by the state.

IN PICTURES: For the love or hate of weed

Crowds flock to back or protest legalisation
News
4 years ago

It is likely the new court date will be for a week next year to ensure the legal teams are available.

The couple argue that the law banning the adult use and sale of dagga is irrational because alcohol‚ which is more harmful‚ is not banned; the constitution does not allow irrational laws.

They also argue that the law criminalising dagga use does not serve the law’s purpose of minimising the harms of drug use.

Stobbs said he believes they are ending the first leg of the trial with "the upper hand".

He also said people who donated money for the case now knew that "we didn't blow their money on weed; we brought them the definitive trial". The trial has been live streamed to audiences around the world at the dagga couple's cost.

The state‚ which is opposing the bid to have the ban on dagga ruled unconstitutional‚ has filed 4‚000 pages of documents to the Pretoria High Court.
News
4 years ago

Stobbs said the past three weeks in court had been expensive. This included the cost of flying a witness‚ Professor Donald Abrams‚ from the United States to South Africa. He was unable to testify because the start of the trial was delayed.

But‚ said Stobbs: "The cross examination cost them [the state and Doctors for Life] dearly. It will mess with their reputations. It was far too aggressive for a hearing. This is not a trial. This means no one is going down."

The main witness‚ Nutt‚ argued that his research showed alcohol was far more harmful to society and more likely to cause violence and car accidents.

Nutt is a world leader in the comparative harms of drugs. He was fired from the UK government's advisory body on illegal drugs after he made a range of comments‚ including that taking ecstasy is safer than horse riding.

Nutt does not dispute dagga has harms‚ but he argues criminalising people for using it does not best mitigate its harms.

He criticised Harvard University psychologist Bertha Madras‚ the state’s witness on the harms of dagga‚ for not being an expert on cannabis and for working for anti-drug lobby.

He also said "prohibition was the gateway drug"‚ not the drug itself. Forcing people to buy dagga on the black market put them into contact with drug dealers who then offered them harder‚ more addictive drugs‚ he said.