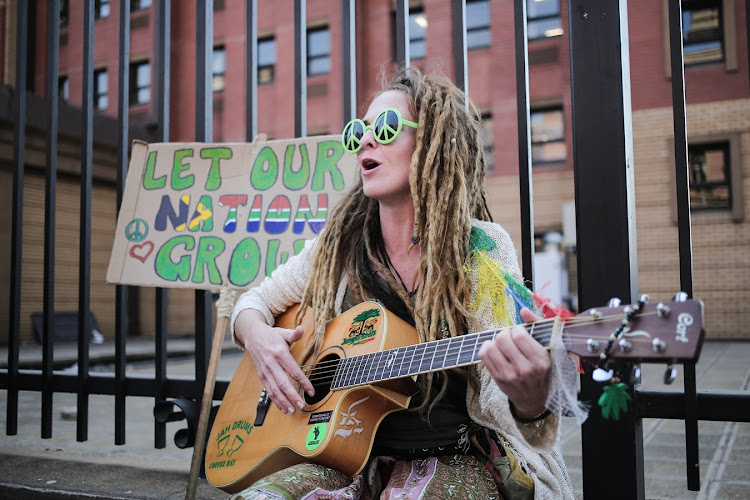 Caiti Woolcott plays guitar outside the North Gauteng High Court in Pretoria in support of the case brought by the Dagga Couple who have taken the fight to legalise Marijuana to court. Woolcott recently moved back from Tailand where she ran a bar there for 6 years.
Image: Alaister Russell

The state‚ which is opposing the bid to have the ban on dagga ruled unconstitutional‚ has filed 4‚000 pages of documents to the Pretoria High Court.

Jules Stobbs and Myrtle Clarke‚ nicknamed the dagga couple‚ have asked the court to find the ban on adult dagga use unconstitutional.

Their lawyer Paul-Michael Keichel from Schindlers Attorneys explained the delay: "The adjournment is really because in the last week‚ the state and Doctors for Life have been submitted more than 4‚000 pages of documentation".

"And truth be told‚ while we would love for the trial to run and continue [on Tuesday]‚ we don’t feel comfortable continuing without properly considering those documents.

"As they say‚ the devil is in the detail. We certainly can't continue unprepared as to what their case is. The documentation should have been in weeks ago but the fact is‚ it wasn’t."

The state was supposed to have its evidence filed by March 31‚ Advocate Don Mahon told the court in the first week of trial.

It filed it this week‚ the third week into the trial.

The state delayed the trial in the first week by trying to have all the annexures to the dagga couple's evidence removed from court evidence. They argued it was irrelevant.

The annexures included all the scientific studies that were used by expert witnesses to back up their opinions.

The state did not win in the application to have evidence removed‚ but the delay in the trial meant US oncologist Donald Abrams could not testify on medical uses of cannabis as he had to return home.

Keichel said the legal team would not oppose the new evidence.

"We have to pick our battles …to try disallow evidence.. that would level a whole lot of the same criticisms against us‚ that we have levelled against them. [The criticism we had against them] was trying to keep evidence out of court.

"We are not about trying to keep evidence out."

An application to have evidence disbarred would take a few days‚ he said. "We don’t want to create more side shows. We would rather allow in the evidence‚ take a day to consider it and then get on with business."

The case will start again on Wednesday.

The South African law banning the smoking and cultivation of dagga is racist‚ unscientific and not rational or based on good law making.
News
5 years ago

The Gauteng Department of Social Development is paying for the transport and T-shirts for protesters from various anti-drug groups demonstrating ...
News
5 years ago

Nearly 200 drug-related arrests in Bluedowns cluster in past week

A total of 197 arrests were executed relating to drugs during disruptive operations conducted in the Bluedowns cluster in Cape Town over the past ...
News
5 years ago

More than 100 people arrested for the possession of dagga have had their prosecutions put on hold‚ while the case to have the laws banning dagga ...
News
5 years ago