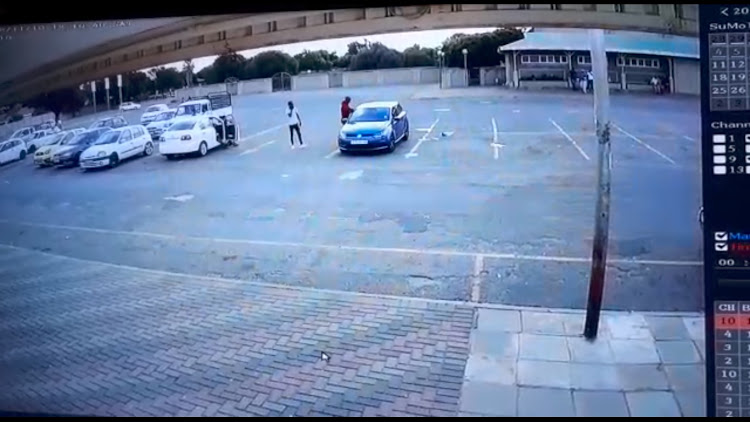 A screenshot of CCTV footage recorded of the incident where a man was shot and killed inside of his car at a shopping centre in Welkom.
Image: Screenshot

Three men were arrested on Wednesday in connection with the murder of a 54-year-old man who was shot and killed at a shopping complex in Welkom at the weekend.

Police spokesman Brigadier Sam Makhele said a firearm believed to be the murder weapon was also confiscated. Makhele said more arrests were imminent as the police were interrogating the trio.

Shai Mikia Mohapi was shot and killed in his vehicle while waiting for his wife at the Commando shopping complex in Welkom on Saturday evening. His attack was captured on security cameras. The video has gone viral.

Mohapi was approached by two armed men who shot him several times at point blank range. They then pulled his body out of the vehicle before fleeing in the blue VW Polo.

Mohapi died at the scene and his vehicle was later discovered abandoned in Steyn Street in Welkom.

The men will appear in court soon.

Free State provincial commissioner Lieutenant-General Moeketsi Sempe congradulated the investigating team for their swift action in dealing with the incident.

“This is what we call stamping the authority of the State at its best. You [criminals] will be hunted and brought to book in the Free State,” Sempe said.

'To think he was shot dead on his wife's birthday, that is very very sad': Eyewitness describes fatal shooting in Welkom shopping centre parking lot
News
3 years ago

A manhunt is under way for two men - one of whom walks with a limp - who were filmed on CCTV killing a man inside his car at a shopping centre ...
News
3 years ago

Parliament's portfolio committee on mineral resources has extended its condolences to the family and colleagues of a mine safety officer who was ...
News
3 years ago