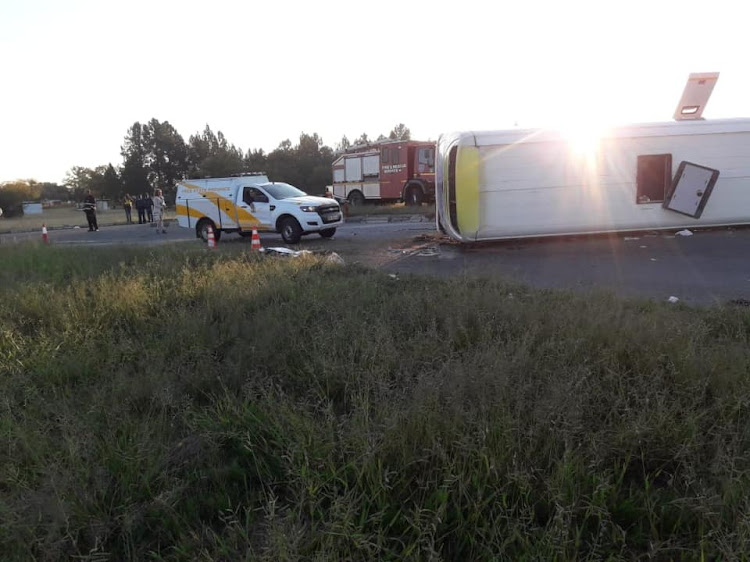 The bus overturned on Alma Road in Welkom around 04:50am on Monday.
Image: Free State Department of Health

The driver of an Intercape bus that overturned in the Free State - killing at least eight people and injuring 45 - was found hanging near the crash scene early on Monday in an apparent suicide.

The bus crashed on Alma Road in Welkom just before 5am on Monday.

Police spokesperson Brig Motantsi Makhele told TimesLIVE at noon that eight people had died, including two children, while 45 others had been injured and transported to various hospitals.

"The body of the driver was found hanging from a tree not so far from the accident scene," said Makhele, adding that an inquest docket had been opened.

The Free State department of health said the driver was 32 years old.

Department spokesperson Mondli Mvambi confirmed that nine people had died. "Seven people died on scene. The driver of the bus ran away and hanged himself. A child died later in hospital," said Mvambi.

"It is possible that the bus driver might have perceived that he might be taking blame for the accident. He could have been shocked. It could be a number of things."

The breakdown of the fatalities is as follows:
4 females
3 kids
1 Male the driver who committed suicide
1 child just passed away in Medi clinic

A multi-vehicle accident on the N1 near Grasmere Plaza has led to the death of four people and left more than 20 people injured.
News
2 years ago

Mpumalanga police are in mourning following the death of an officer, Constable Jane Ntuli, who was eight months pregnant, in a car crash at the ...
News
2 years ago