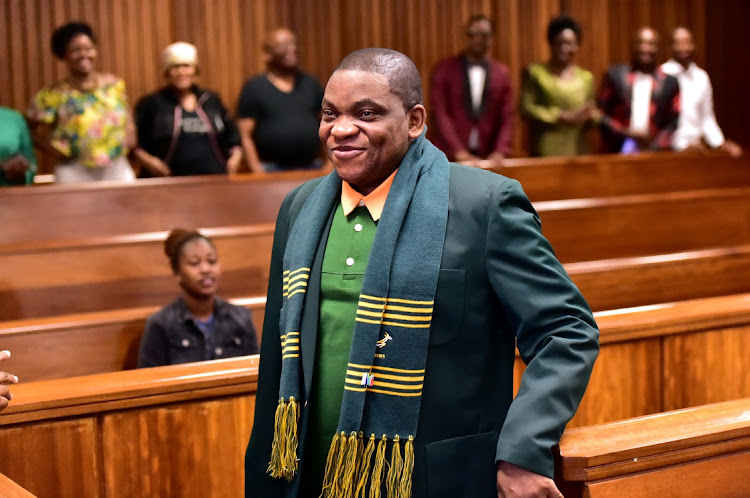 Shying away from his usual flamboyant attire, rape and human trafficking accused pastor Timothy Omotoso was wearing a new outfit when he entered the dock of the Port Elizabeth high court on Thursday.

To the amusement of those in the public gallery and some court officials, Omotoso sported a Springbok rugby jersey, a green jacket and a Springbok-emblazoned scarf draped around his neck — in an apparent sign of support for the Boks’ Rugby World Cup win.

DispatchLIVE reported that Omotoso, 60, and his co-accused Lusanda Sulani, 36, and Zukiswa Sitho, 28, appeared briefly before judge Irma Schoeman only for the matter to be postponed again pending the findings of their application to the constitutional court.

The three approached the highest court in the land after their failed attempt to get the supreme court of appeal (SCA) to overrule Schoeman’s earlier decision to allow the entire trial to be heard in Port Elizabeth.

Peter Daubermann, defence attorney for Omotoso and his co-accused, had argued that the Port Elizabeth court did not have the jurisdiction to deal with all 97 charges against them.

In August, Schoeman dismissed an application for leave to appeal against her decision to allow the case o be heard in Port Elizabeth.

In its October 17 ruling, the SCA dismissed the application for leave to appeal against Schoeman’s decision on the grounds that there were no reasonable prospects of success and that there were no other compelling reasons why an appeal should be heard.

This prompted Omotoso and his co-accused to petition the Constitutional Court.

Omotoso, Sulani and Sitho face charges including sexual assault, rape and human trafficking. They have not yet pleaded.

On Thursday, prosecutor Ishmet Cerfontein told the court there was still no feedback from the Constitutional Court and asked the court to postpone the matter. It was postponed to January 28.

Pastor Timothy Omotoso to go to ConCourt after dismissal of appeal

IN PICTURES | Flamboyant Pastor Timothy Omotoso is 'general' and foe

Alleged sex-pest pastor Timothy Omotoso is appearing in the Port Elizabeth High Court wearing flamboyant attire, carrying a Bible and being hailed as ...
News
2 years ago

The trial of alleged rape and human trafficking accused pastor Timothy Omotoso and his two co-accused is expected to begin afresh on Tuesday in the ...
News
2 years ago