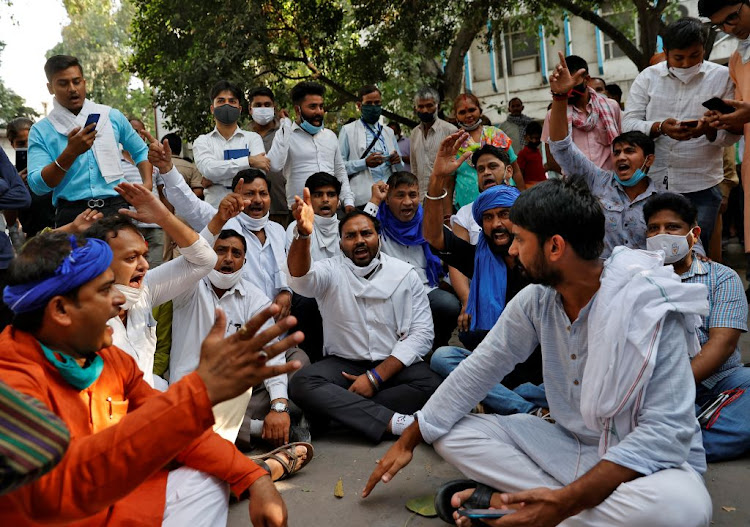 Demonstrators shout slogans during a protest inside the premises of Safdarjung Hospital in New Delhi, India, on September 29 2020, after the death of a rape victim.
Image: REUTERS/Danish Siddiqui

A woman from the lowest rung of India's caste system died in hospital on Tuesday weeks after authorities said she was raped by a group of men, triggering protests and opposition criticism over what it said was a failure to protect women.

Her case was the latest in a string of gruesome crimes against women in India that have given it the dismal reputation of being one of the worst places in the world to be female.

One woman reported a rape every 15 minutes on an average in India in 2018, according to the latest government data released in January.

“There is next to no protection for women. Criminals are openly committing crimes,” Priyanka Gandhi Vadra, a leader of the opposition Congress party, said on Twitter.

The 19-year-old victim, belonging to the Dalit community, was attacked and raped on September 14 at a field near her home in Hathras district, 100km from Delhi, authorities said.

Police have arrested four men in connection with the crime.

Indian rape victim dies in hospital after being set ablaze

A 23-year-old rape victim died in a hospital in the Indian capital two days after she was set on fire by a gang of men, including her alleged rapist, ...
News
1 year ago

On Monday, the woman was brought from a hospital in Uttar Pradesh state to New Delhi's Safdarjung Hospital, where she died while undergoing treatment, authorities said.

About 300 protesters from the Bhim Army, a party championing the rights of Dalits, entered the hospital premises and shouted slogans near the mortuary where the woman's body was kept.

“We will take the matter to fast-track court for the faster investigation and collection of evidence,” district authorities in Hathras said in a statement.

The woman's home state of Uttar Pradesh, which is ruled by Prime Minister Narendra Modi's Bharatiya Janata Party, ranks as the most unsafe state for women in the country.

Last December, a 23-year-old Dalit woman was set ablaze by a gang of men as she made her way to a court in Uttar Pradesh to press rape charges.

Man 'bets' his wife after running out of cash, lets two men 'gang-rape' her: reports

Reports that an Indian man bet his wife and let his cousin and a friend gang-rape her after he ran out of money have shocked the global community.
News
1 year ago