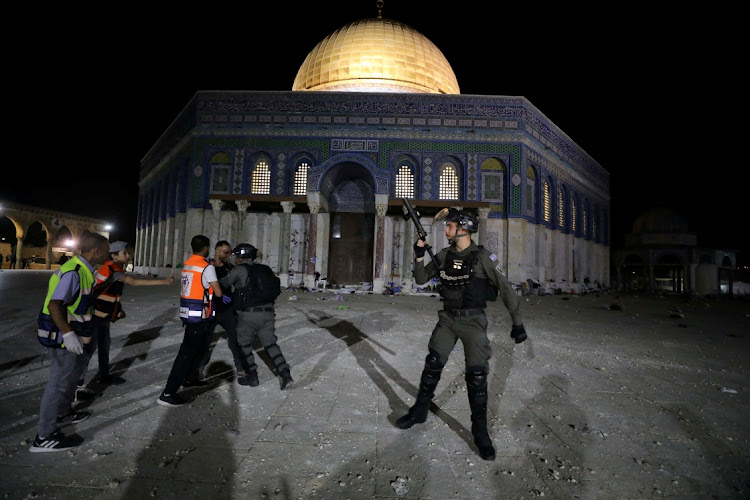 An Israeli policeman scuffles with a Palestinian in front of the Dome of the Rock during clashes at a compound known to Muslims as Noble Sanctuary and to Jews as Temple Mount, amid tension over the possible eviction of several Palestinian families from homes on land claimed by Jewish settlers in the Sheikh Jarrah neighbourhood, in Jerusalem's Old City, May 7, 2021.
Image: REUTERS/Ammar Awad/File Photo

Saudi Arabia and the United Arab Emirates on Saturday condemned Israel's plans to evict Palestinians from homes on land claimed by Jewish settlers, following a night of violence in Jerusalem.

The clashes at Islam's third holiest site and around east Jerusalem, which injured 205 Palestinians and 17 police officers, came amid mounting anger over the planned evictions.

“Saudi Arabia rejects Israel's plans and measures to evict dozens of Palestinians from their homes in Jerusalem and impose Israeli sovereignty over them,” the kingdom's Ministry of Foreign Affairs said in a statement carried on Saudi-owned Al Arabiya.

The UAE, which normalised relations with Israel last year, “strongly condemned” the clashes and the potential evictions, in a statement by the UAE's Minister of State for Foreign Affairs Khalifa al-Marar, and urged Israeli authorities to reduce tensions.

In the statement, carried by state news agency WAM, Marar stressed “the need for Israeli authorities to assume their responsibilities — in line with international law — to provide necessary protection to Palestinian civilians' right to practice their religion, and to prevent practices that violate the sanctity of the Holy Al-Aqsa Mosque”.

The UAE and Israel agreed to normalise ties last year as part of a US-brokered agreement.

Saudi Arabia, Islam's birthplace, has long championed the Palestinian cause and shunned official contacts with Israel. Riyadh quietly acquiesced to the so-called Abraham Accords — but stopped short of endorsing them.

In November, Israeli Prime Minister Benjamin Netanyahu travelled to Saudi Arabia and met its crown prince, in the first publicly confirmed visit there by an Israeli leader.

Prime Minister Benjamin Netanyahu's deadline to form a new government expired on Wednesday and Israel's president was poised to ask another candidate ...
News
1 year ago