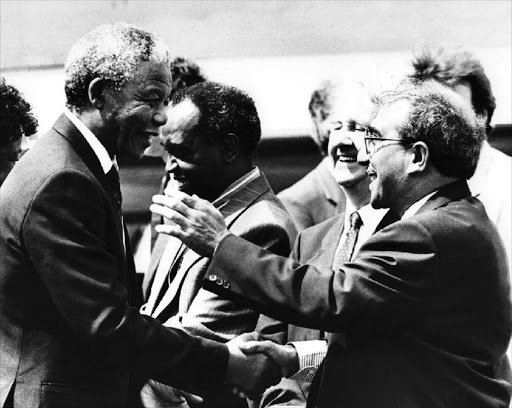 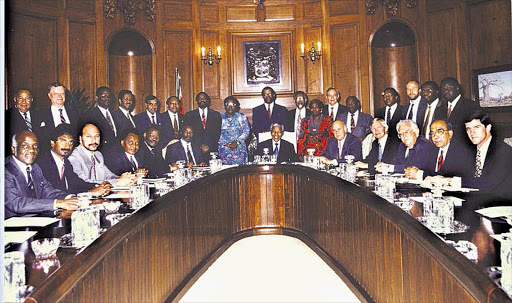 The late Kader Asmal, in this extract from his memior, recalls NP alarm at the ANC's tradition of vigorous debate

Following the ANC's overwhelming victory in the first democratic elections of April 1994, Nelson Mandela - as ANC president - soon got down to the business of choosing his cabinet.

As late April drifted to early May, the rumour mill started to click into high gear.

Quite by chance I read in the press one day that I was to be minister of constitutional development. I was very excited at this prospect, as the legitimacy of the struggle and of the state had been an important aspect of my work as a lawyer in the anti-apartheid movement and as a researcher and teacher at university.

Soon afterwards, I read that this ministry was to go to Roelf Meyer, the National Party's capable chief negotiator. The constitutional task was a continuation of his role in the De Klerk government and recognised his part in the negotiations.

Still, I was to be an MP in the first parliament of a democratic South Africa, and I had no doubt this would afford me plenty of opportunities for contributing to the rebuilding of my country.

Shortly before the inauguration of our new president, I was notified that [my wife] Louise and I must be ready to fly to Pretoria early on 10 May for the ceremony.

We were to travel up and back the same day, dressed in our finery, and were not allowed to take any luggage. Naturally, on this occasion at least, we did as we were told. We grabbed my briefcase and Louise's handbag and drove to the airport to catch the first flight to Johannesburg.

It was a glorious day, and there was a huge buzz of excitement when we arrived at the Union Buildings, though we had to complain that the outgoing ministers had taken all the best seats.

Eventually the seating was rearranged, and we could wander around greeting comrades in the struggle and leaders of the solidarity movements overseas.

When it was all over, I found myself with Trevor Manuel waiting for transport. There was none. The former ministers had left in their official cars, and whatever else was provided was not enough for everyone.

By this time I had been told I was to stay the night, and eventually the driver of a bakkie took pity on us and drove us to the hotel. We had no nightclothes, not even a toothbrush between us - and no fresh clothes to put on in the morning to wear to the Union Buildings, where I had been summoned.

I did manage to find an acquaintance who kindly bought me a clean white shirt, so Louise stuffed my worn shirt into a plastic laundry bag. Though she tried to carry this about her as inconspicuously as possible, she did stand out somewhat in the company of the immaculately turned-out National Party wives, resplendent in gloves and hats.

Inside the Union Buildings we gathered together with our ANC comrades and a group of luminaries from the National Party and Inkatha Freedom Party. As the ANC achieved victory through a negotiated settlement and not through a coup, revolution or military victory, we had accepted the necessity of a government of national unity (GNU) under the constitutional compromises of 1993 rather than a government based on our outright electoral victory.

The GNU featured ourselves, the National Party and Inkatha in a coalition aimed at building reconciliation and national unity and easing fears of post-election ANC domination. Each of these parties required its seats at the cabinet table.

One by one the prospective ministers were called in to our new president and were told what posts they were offered.

In the end it was my turn and I was informed that I was to be minister of water and forestry (a title later changed to the more comprehensive water affairs and forestry). I accepted gratefully, and left the room to tell Louise. She excitedly picked up the nearest red telephone, on which it turned out she could dial England, and was able to tell her parents the news.

We then all assembled together in the cabinet room to take the oath of office. The aides helping us find the right seats at first marshalled the men into the front row and the women at the back, as was the old practice.

Soon, though, someone realised what was happening, and we sorted ourselves out.

Being minister of water affairs and forestry seemed at the time a humble portfolio in the grand scheme of things, and a far cry from the post of constitutional development I had hoped for, or justice, or any of the glamour portfolios.

Some questioned how a person with no engineering or scientific background could manage such a portfolio, to which I replied that I would be carrying out the dictates of the ANC Freedom Charter. (In fact, though there is a section in the Charter entitled "There shall be houses, security and comfort", it makes no mention of water.) Nevertheless, I threw myself into the job with all the energy I had. I didn't in any way feel slighted. I was delighted to have been chosen by Mandela, and elated to work with and for him. I still recall laughing out loud with pleasure when I entered my office on my first day as minister.

I was soon to appreciate the importance of clean water to ordinary South African men and women. Later, Manuel, who was at first made minister of trade and industry and subsequently became finance minister, was to say I was the only person Mandela could possibly have chosen to turn water affairs into a "sexy ministry".

While the ANC's election victory had left the entire movement and its friends all over the world in a state of euphoria and relief, there were some uncomfortable facts underpinning the work of the first Mandela cabinet. The first was that the GNU required the presence of a large number of people in our cabinet whom we would normally have preferred not to be there.

First and foremost of these was, of course, FW de Klerk, former head of the apartheid state. De Klerk was one of two deputy presidents in the GNU - along with Thabo Mbeki from the ANC - on account of the NP having won 20% of the seats. De Klerk was accompanied in the cabinet by five of his NP colleagues, including Meyer and Pik Botha, the world's longest-serving foreign minister turned minister of mineral and energy affairs.

Mandela and De Klerk, president and deputy president, Nobel peace prize co-laureates, did not get on well together. I would characterise the relationship as one of "extreme discomfort".

Ironically, this was the unspoken rubric of our GNU: that the two top leaders couldn't stand each other. The intensity of their dislike had been captured in various famous outbursts during the negotiations process and was reported periodically in the press.

The climax of this occurred in one epic speech delivered by Mandela immediately after the Boipatong massacre in 1992. Few who were present had ever seen Mandela as furious as when he stormed out of the World Trade Centre and pulled the ANC out of the negotiations.

By 1994, there was a quiet, deep-seated antagonism between Mandela and De Klerk that invariably had repercussions in cabinet.

In cabinet itself, the culture clash between the NP and the ANC ministers played itself out fortnightly. The "Nats" could hardly have come from a more contrasting decision-making tradition than the ANC. The Nats followed orders and protocol. There was little debate and certainly no NP minister challenged De Klerk in cabinet on anything.

The ANC, on the other hand, was used to engaging in heated debate and argument about issues. This was part of the vibrant jostling that occurs in a true democracy. People stated their views, honestly and openly. Consensus was allowed to establish itself in a place where everybody was comfortable, through a process of argument and counter-argument, debate and riposte. The NP ministers were baffled, even alarmed, by the intense debate that took place in cabinet.

During one of these, an NP minister shouted in frustration, "But the president has already made a statement about it."

In an NP government, that would have been the end of the matter. Not with the ANC. "We don't believe in uno duce, una voce," piped up Nkosazana Dlamini-Zuma. "We're different."

So there was a rather direct culture clash between the two main protagonists in the Mandela Cabinet, the ANC and the NP.