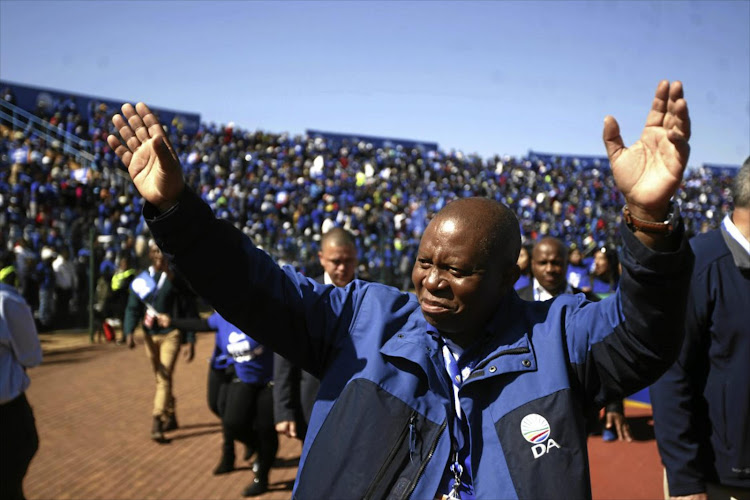 Throughout Mashaba’s term in office‚ he has been accused of fuelling xenophobia by making unconstitutional statements about foreign people living in the city.

The Africa Diaspora Forum (ADF) says these statements are “reckless” and “fire kindling”. In a statement released earlier this month‚ the ADF said that it worried these remarks “may incite more xenophobic violence”.

Mashaba has been quoted widely saying that “foreigners‚ whether legal or illegal‚ are not the responsibility of the city” and that “[the city of Johannesburg] will only provide accommodation exclusively to South Africans”.

Mashaba plans to clean up the city centre to invigorate economic growth. To do so‚ Mashaba aims to “expropriate” run-down buildings in the city centre to sell them to private investors‚ evicting residents “by force” if necessary.

City of Johannesburg workers have gone on strike in solidarity with their colleagues who have been arrested for fraud.
News
4 years ago

Attempts to contact Mashaba about whether the investors will be commercial or residential developers were unsuccessful.

Mashaba has also been quoted calling on foreign aid organisations like the United Nations to step in and “assist” with what he calls a “crisis” of foreign people living in the city. “He must be precise about what he wants to do with migrants‚” ADF chairperson Marc Gbaffou said. He regards Mashaba’s attitude as “very scary”.

ADF spokesperson Johnson Emeka said: “We have been vilified unfairly by [Mashaba]. Mashaba’s tactics and style is embedded in DA strategy to spur embers of hate against foreign migrants.”

Gbaffou echoed this sentiment. “[Mashaba] keeps repeating himself and making xenophobic comments and nothing is happening to him. We think this is the DA’s strategy‚ like [President Donald] Trump did in the US‚ using a populist strategy to get to power.”

In Mashaba’s 10 point plan for Johannesburg’s economic growth in September last year‚ he was quoted as saying he intends to “make Jo’burg great again” by making the city “business friendly”.

The SA Human Rights Commission has condemned comments made by the Deputy Minister of Police Bongani Mkongi on the problem of hijacked buildings in ...
Politics
4 years ago

In a statement released last week‚ Mashaba said his administration was “committed to ensuring [they] stop the rot” of undocumented migrants living in the city. The next day on Twitter he said that by conducting raids on inner city buildings‚ he is “reclaiming the city from criminals”.

Gbaffou criticised these allegations. “The houses were abandoned by the city‚” he said. “People are struggling to come from Soweto to town to run a small business‚ and they’re not necessarily migrants. There are also South African citizens who are living in these abandoned houses. So the mayor twisted it by saying its hijacked houses.”

Mashaba claims that 80% of people living in “hijacked” buildings are undocumented immigrants.

The Socio Economic Rights Institute (Seri) has questioned these figures‚ claiming that far more South African citizens are living in abandoned buildings in the inner city than people from other countries. Seri has called plans to forcibly evict people from these buildings “unconstitutional” and “inhumane”.

The ADF opened a case with the South African Human Rights Commission (HRC) in February this year.

In the coming weeks, as Houston turns its attention to rebuilding areas devastated by Tropical Storm Harvey, people like Jay De Leon are likely to ...
News
4 years ago

“We told them that these types of statements might lead to violence and they’re investigating those claims‚” Gbaffou said. “We saw some attitudes from South African citizens even to the word ‘migrant’ which are very scary. We fear for the lives of migrants and our members.”

GroundUp has been unable to get hold of the HRC to find out the status of this investigation.

Gbaffou‚ an Ivorian who has been living in Johannesburg for more than 20 years‚ is “very concerned” by Mashaba’s plans to evict foreigners from the city. “[I have seen] in previous years that whenever an authority of that calibre makes a comment like this‚ then you have some attacks on migrants‚” he said. “In 2015 we saw it when King Goodwill Zwelithini made the comment in KwaZulu-Natal. Migrants were attacked. Many people were killed and injured.”

In February this year‚ Groundup reported on a march against migrants hosted by the Mamelodi Concerned Residents group. Many claimed that xenophobic comments by Mashaba spurred on the protestors.

“Everyone wants to take out their anger on migrants‚” Gbaffou said. “We have tried to speak to [Mashaba] but he doesn’t want to engage about it.”

By pushing migrants out of the city‚ Johannesburg’s character will change‚ Gbbafou said. “In a cosmopolitan city like Johannesburg‚ you cannot say ‘let us expel all migrants’. You go to big cities around the world and they’re made of all different types of people‚ coming from everywhere‚ to make a vibrant city. Johannesburg is a cosmopolitan city.”