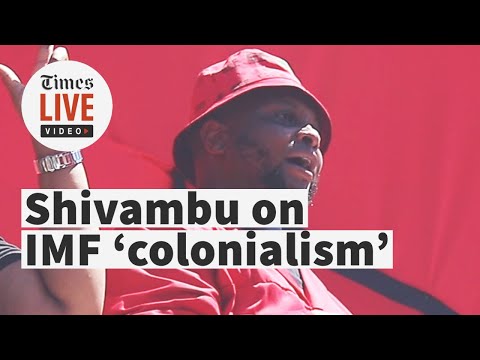 “Overall, this was an extremely disappointing budget that repeated old promises, continued its austerity trajectory and was devoid of any new policy interventions to solve the problem of economic stagnation.

“There is no plan to fix the economy or create jobs, no plan to fight corruption and no plan to stop the leakages that have led to 10% of the budget being lost to corruption,” said union spokesperson Sizwe Pamla.

Godongwana delivered his speech on Wednesday moments after the EFF and a group of protesters took to the parliamentary precinct to march against the government taking out any additional loans from the International Monetary Fund and the World Bank to fund government policies.

The union said there were also concerns that the government had no clear strategy on job creation.

“The central thrust of the budget, while providing some relief to the unemployed, is to focus on reducing the debt. We have long argued that the nation’s number one economic problem is economic stagnation and not debt levels, as important as that is.

“That 59% of the budget is spent on social relief and support for the poor reflects the government’s failure to adopt policies that empower South Africans to look after themselves and their families. A mass employment programme and stimulus plan are missing from the budget, and simply reducing the debt on its own will not grow the economy or create jobs,” Cosatu said.

The federation, however, welcomed the extension of the R350 social relief of distress grant, which will cost the fiscus R44bn. This as the government remains under pressure from opposition parties, labour unions and civil society bodies to introduce a basic income grant to cushion the poor and the unemployed.

“It now needs to be extended and linked to skills training programmes to help its recipients find jobs,” Cosatu said.

The extension lays the foundation for a basic income grant, to which President Cyril Ramaphosa gave a thumbs up during his party’s January eighth annual celebration in Polokwane.

The federation, however, said it was disappointed that the grant had not been adjusted for inflation or in line with the food poverty level.

SA’s economic climate necessitated that government expand its interventions to deal with structural constraints which have inhibited the economy from producing jobs and poverty-reduction outcomes, according to the federation.

“The budget was not daring or sweeping enough to meet the nation’s challenges head on.  An anticipated 1.8% GDP growth trajectory over the MTEF (medium-term expenditure framework) will not see any reduction in unemployment.”

Godongwana announced that the National Treasury had resolved not to hike the general fuel levy or the Road Accident Fund levy for the first time in 31 years to cushion hard-pressed consumers from soaring petrol prices.

“No increase to the fuel levy will help cushion workers and the economy. The fuel price regime needs to be overhauled. Cosatu hopes that the commitment to do so will not be another false mirage.”

The federation welcomed the allocation of R8bn to fund the National Health Insurance, and R26bn to upgrade 900 informal settlements, among other announcements.