It's time to ban hi-tech shoes

Get rid of all supposedly performance-enhancing devices 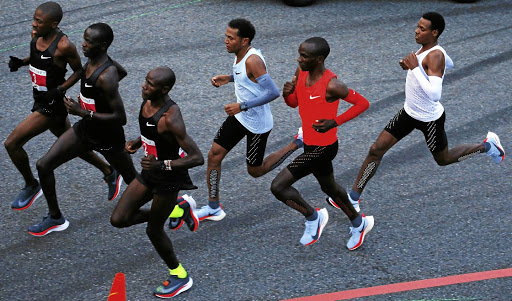 You may remember the Vaporfly - it was the shoe Nike launched when it staged its sub-two hour marathon attempt in May, claiming that it was 4% more efficient (and thus faster) than any other shoe.

There are many important questions about the study from a scientific perspective, but the one that is most interesting in the wider context is: "Should the shoe be banned?"

Technological progress in sport is inevitable. For example, we no longer play tennis with Bjorn Borg's wooden tennis rackets. Yet sometimes we do enforce regulations to halt technology's effects on sport. A recent example was swimsuit technology. In 2008 Speedo introduced the LZR Racer, developed with Nasa, featuring a corset design, polyurethane panels to eliminate drag and ultrasonic bonding to remove seams.

Nobody knew exactly how much the suit helped, or why, but it didn't matter. It was so effective that only two medals (out of 96) were won by a swimmer not wearing it during the Beijing Olympics.

All but two Olympic records were broken, with 25 world records. It kicked off a "swimsuit war" and by 2009 rival manufacturers had caught up and added their own innovations. World records became irrelevant - I tried to keep track of how many were broken, but lost count somewhere around 200.

By the end of 2009 swimming's governing body intervened, "unwinding" regulations to say that men must swim in shorts from hip to knee, women from shoulder to knee, and suits could be textile only.

That episode holds some important lessons. First, nobody really knew how many seconds the suit would cut off a swimmer's time. Yes, scientific tests showed drag reductions and provided theoretical reasons for advantages. But actually quantifying performance was impossible.

This is important, because the Nike Vaporfly invites the same issue. That is, we cannot accurately measure how many seconds the shoe might be worth to an athlete.

All we can do, and which triggered this latest round of discussion, is to measure some indirect aspect of performance, such as how much oxygen a runner uses, and then predict what it might mean to performance. It is here that science fails and marketing takes over.

In response many are arguing that shoes could be regulated to ensure that the performance advantage does not become too large.

But how do we identify "too large"? Second, it's irrelevant because we can't measure the performance advantage with enough precision to be able to draw this line, even if we could agree on where to draw it.

Yes, we can measure indirect aspects, but translating them to performance, as many are suggesting, has absurd implications.

For instance, the world's best marathon runner, Eliud Kipchoge, recently ran 2:03:32 in the Vaporfly. Assuming a 4% performance boost from the shoe, that performance, in any other shoe, would have been 2:07:30. Yet two years ago Kipchoge ran 2:04:00 at the same race in the old shoes.

Similarly, the winner at the Chicago marathon this year would have been almost five minutes slower in other shoes. Bottom line - elite athletes' performances don't match lab results.

Also, it is likely the performance advantage may be larger in some athletes than others - does this mean that the shoe is legal in some cases but not others?

It really is a minefield, the fundamental problem being science's inability to measure performance benefits with precision.

For this reason, my desire would be to ban the concept of a performance-enhancing shoe and not its scale. We cannot measure scale or magnitude of performance, but we can legislate against the materials used to provide them, however large or small.

I sincerely hope the authorities ban the addition of potentially assistive devices into shoes so that we can appreciate running for what it is and not for the unmeasurable aspects provided by technology.