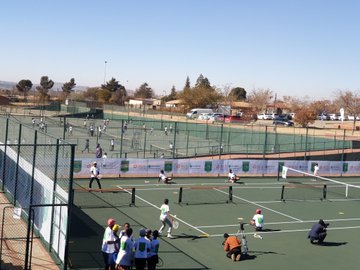 Tennis South Africa (TSA) on Tuesday announced a development initiative in the form of a nation-wide school tournament that will culminate in a final next year.

ATP star Kevin Anderson has been roped in as an ambassador for the programme.

Schools can enter teams of four players into the Rising Star tournament‚ sponsored by BNP Paribas and RSC‚ which will be held in three phases‚ from the first stage until the national final of 10 teams.

Two of them will be wild card entries from historically disadvantaged backgrounds.

“The foundation of tennis in this country is grass roots and schools‚” TSA chief executive Richard Glover said at the launch at the Arthur Ashe stadium in Soweto.

He said talent identification was a key part of the programme.

“We will be looking to identify and place talented players from historically under-serviced communities in our development centre programmes or at private academies who are willing to support the initiative.”