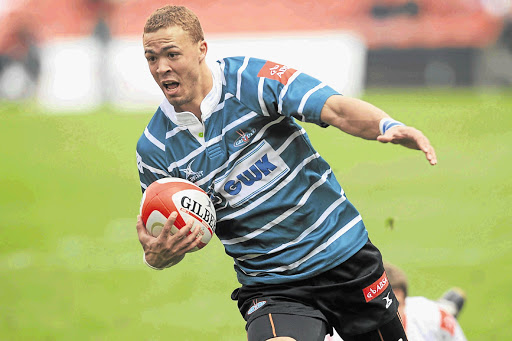 Springbok wing Bjorn Basson, who is now with the Bulls, is one of many talented players who got their big chance when playing in Kimberley Picture: GALLO IMAGES

With the new Currie Cup format decided and the Southern Spears pushing for immediate inclusion, Griquas - one of the founding members of the competition 125 years ago - may soon be facing relegation to the second tier.

This is despite a rich, proud heritage and sustained success in producing world-class players. From a sentimental perspective, the demotion smacks of cruelty, robbing from Peter to pay Paul. From a rugby viewpoint, the mooted move is tantamount to gross negligence.

Saru have confirmed that from next year the Currie Cup elite division will comprise six teams, but insist they have not yet decided on the six teams or the criteria for eligibility. This suggests they are still trying to work out how to squeeze Eastern Province into the mix.

This dilly-dallying has the makings of a royal screw-up and former Griquas and Springbok coach Andre Markgraaff is outspoken about the handling of the situation.

"This is so unfair ... how can you still be negotiating this late in the year for next year's competition? There are so many logistical issues to consider that this smacks of unprofessionalism of the highest order," he says.

"There is the serious matter of players contracts to consider, sponsorship agreements to honour ... there are so many stakeholders that this decision cannot be taken so unprofessionally."

Markgraaff is adamant someone is making a gaffe. "Griquas over the years, since 1996 in fact, have proven worthy competitors," he says.

"They have not finished worse than sixth in all that time - there is no way they deserve to go out."

Markgraaff's maths is only slightly awry. In the past six seasons, Griquas have not finished lower than sixth and have proved the best of the so-called minnows by a country mile.

They are competitive , pushing the boundaries of excellence with limited means, and develop top-class players.

This season, Griquas boast 12 members of the Cheetahs Super 15 squad, while Zane Kirchner, Bjorn Basson and Tiaan Liebenberg all learned their rugby in Kimberley. Some years ago, Victor Matfield, Albert van den Berg, Dave von Hoesslin, Phillip Smit and Dawie Theron made up one of the strongest teams in the Currie Cup - in Griquas colours.

In 1999, they topped the Currie Cup standings, losing to Western Province in the semifinals. All those players represented the Springboks.

One of Griquas' best-known expats is Gaffie du Toit. He went to school near Kimberley and strongly believes a Currie Cup without Griquas would be a rugby catastrophe.

"I would hate to see that happen. If it wasn't for Griquas, I would never have made it. You can't sacrifice one team for another like this, it does not make rugby sense. I understand the political dynamics but most people with half a rugby mind would agree with me.

"If they want to talk politics, consider this: Griquas have a strong coloured community - just look at Bjorn Basson. Demotion would be disappointing to that community."

Adds Du Toit: "This is about politics and money. Port Elizabeth has a World Cup stadium that is going to be a white elephant. While they want to improve rugby in that area, it does not make sense to sacrifice a union that is doing well."