Heartbreak as England get rugby revenge over Baby Boks 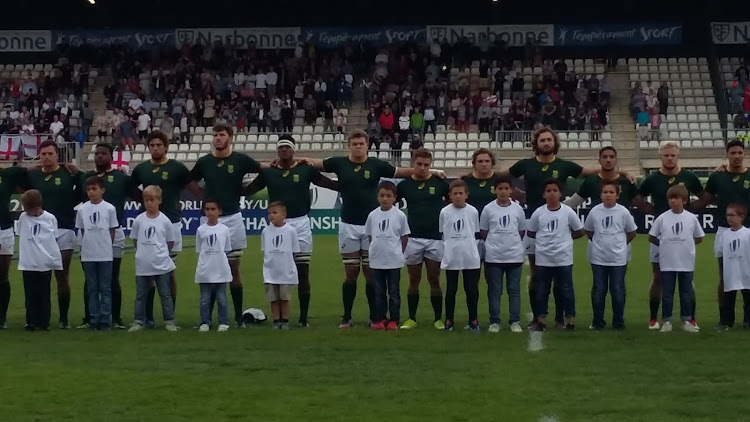 The Junior Springboks sing the national anthem ahead of Tuesday's semi-final against England.
Image: @JuniorBoks via Twitter

The Junior Springboks did not have the tactical intelligence to emulate their senior counterparts by overturning a massive deficit‚ as they were dumped out of the U20 World Championships‚ losing 32-21 to England on Tuesday.

South Africa made a poor start and were 19-0 down inside 23 minutes in Narbonne‚ but fought bravely until the end only to come up inches short.

After a shocking first 30 minutes‚ which was a repeat of their final pool match against France last Thursday‚ they left themselves firmly on the back foot.

Leaky defense and England’s sure handling and pace in the greasy conditions caught the Junior Boks out. England took early command of the match‚ which gave them enough daylight to cling on to until the end.

In difficult‚ slippery conditions‚ the Junior Boks took time to gain ascendancy over England‚ and although they outscored the Six Nations powerhouse 24-10 in the second half‚ it was too little‚ too late.

In a second half they completely dominated‚ SA captain Salmaan Moerat chose to kick several penalties to the corner when they were well within three-point range.

That's it, @EnglandRugby have secured a spot in the #WorldRugbyU20s Championship final after a thrilling 32-31 in over South Africa in the semi-final pic.twitter.com/feIyVHK4RM

Although prop Asenathi Ntlabakanye scored from one of those lineouts late in the game‚ had the Junior Boks kicked an earlier penalty when they were 25-19 down‚ the match might have panned out differently.

At that stage England were on the rack and visibly wilting. But they survived the lineout drive and then scored an intercept try through wing Jordan Olowofele that took the game out of SA’s reach. What might have been a three-point gap‚ suddenly became 13 points with 18 minutes to play. It was too wide to bridge despite and excellent late surge by SA.

Both sides also suffered yellow cards with SA No 8 Muller Uys carded for a high tackle in the first half and England lock James Scott binned six minutes from the end for repeated infringements.

While Uys was off the field England‚ who were already swarming over the Junior Bokkies‚ made the most of the numerical advantage.

Fullback Tom Parton and centre Tom Hardwick scored tries while Uys cooled off on the sidelines‚ which immediately put the Junior Boks in a difficult position.

When England scrumhalf Ben White streaked away for their third try after 23 minutes it seemed the game was up for SA.

But the Junior Boks showed good character to fight back‚ scoring a 33rd minute try from close range through prop Sazi Sandi that gave them a little lift going into the break.

Just after halftime Uys rumbled over to narrow the gap and when lock Ruan Nortje forced his way over in the 54th minute the match was finely balanced.

With the SA pack in control and momentum fully in SA’s favour‚ they failed to take several kickable penalties that could have erased the deficit. Inevitably England‚ through Olowofela‚ broke the shackles.

The Junior Boks again refused to roll over and added late tries via centre Manny Rass and Ntlbakanye to set up a nail-biting final three minutes. England were able to manage it just that little bit better than SA.