Further blow for Boks for matches against Oz and NZ 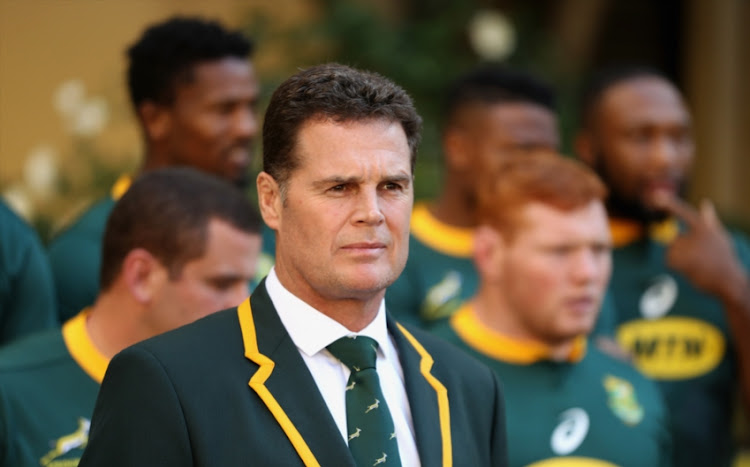 Springbok coach Johan “Rassie” Erasmus has 17 players in Port Elizabeth for next week’s test against Australia while the remainder of the squad are yet to be announced
Image: David Rogers/Getty Images

Erasmus said Vermeulen‚ who plays for Kubota Spears in Japan‚ sustained a hamstring injury that is not worth risking despite the Boks needing to win their matches in Port Elizabeth and Tshwane to earn a decent tournament return.

Erasmus already has 17 players in Port Elizabeth for next week’s test against Australia while the remainder of the squad will be announced on Sunday morning.

Erasmus also said the early arrival in Port Elizabeth was a necessity to get the players ready for Saturday’s encounter.

“He’ll be available in November but if we get two or three injuries and we’re in trouble‚ he’s a phone call away and we can go back onto the regulation but we’re trying to build relationships with clubs‚ which is a tough thing to get right. With the kind of travel that he may encounter‚ he won't be a realistic option for us‚” Erasmus said.

Five blows to Boks for games against Australia and New Zealand

The Springboks will be without five key players for their final two Rugby Championship fixtures against Australia and New Zealand.
Sport
3 years ago

“One can get over-excited and start not looking at the facts of why and how we won [against the All Blacks last Saturday] and what we did well and didn’t do so well.

“We could have come in on Sunday and had normal test preparation but we decided to come in on Thursday and make sure we’re as focussed and prepared.”

While the progress of Erasmus’s team hasn’t been in doubt‚ patience isn’t a virtue South African fans are blessed with.

The weight of expectation will be heavier on the Boks‚ especially after last week’s 36-34 win against the All Blacks in Wellington.

The Springboks also have a recent disagreeable record against the Wallabies‚ having failed to beat them in three previous attempts.

Erasmus said the All Black win released a fair bit of pressure that was on the coaching staff after the consecutive defeats against Australia and Argentina.

However‚ Erasmus also said it would be a mistake to write off Michael Cheika’s side despite their 23-19 loss to Argentina last week.

Springbok coach Rassie Erasmus said that luck played its part in his side’s historic win over the All Blacks in Wellington on Saturday‚ but luck had ...
Sport
3 years ago

“I don’t think you can read too much into the Wallabies’ loss to Argentina. We lost to both those teams and we beat New Zealand‚” he said.

“With a year out from the World Cup‚ the teams are trying and testing a few things and maybe sometimes at a cost of a loss. Argentina are a team that are on the up and maybe Australia weren’t that sharp on the day‚ but the previous week they beat us.

“The pressure was on the coaching staff because the players understand that we have to go through some growing pains to be competitive at the World Cup and that’s what I was trying to say about Argentina and Australia.

“We did experiment and it cost us against Argentina and Australia so the pressure was more on the coaching staff to get the team to keep on believing that what we’re doing is a long term vision.”