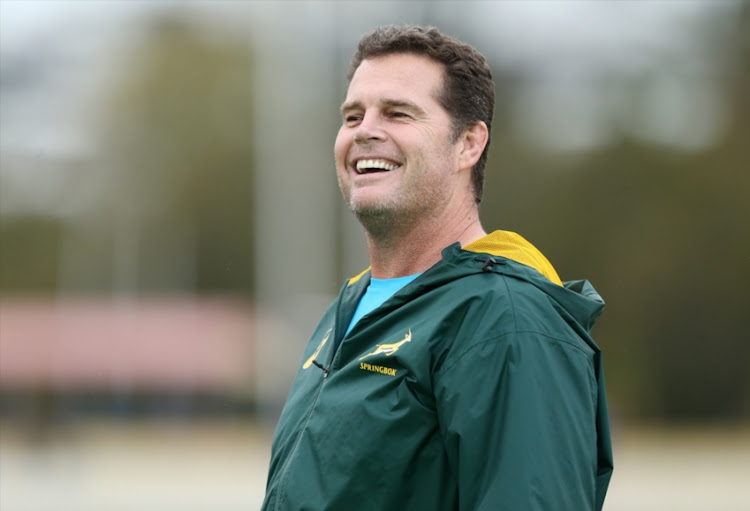 Springbok coach Rassie Erasmus said that luck played its part in his side’s historic win over the All Blacks in Wellington on Saturday‚ but luck had very little to do with it.

If anything the Boks were unlucky on their way to a 36-34 win that shook the rugby firmament’s foundations and saved the Rugby Championship from another year of procession and coronation for the All Blacks.

“We are No 6 or 7 in the world. We still have to catch up to New Zealand‚ Australia and England‚” Erasmus said.

“There are so many teams ahead of us‚ there is no way we can get ahead of ourselves. This is one win against the world’s best team‚ with a bit of luck.”

Seldom‚ if ever‚ have the All Blacks gone into a Test against the Boks as such overwhelming favourites.

Nothing pointed to a Springbok win – from recent form to historical analysis. Nothing.

Yet the Boks prevailed for only the fourth time in New Zealand in the professional era at the 24th time of asking.

They scored a record 36 points – more than any side in history has managed in a single game against the All Blacks in New Zealand.

They won despite conceding six tries‚ conceding 10 penalties to three and surviving a yellow card. There was no luck in this win.

Every inch was earned and every All Black mistake was forced through relentless Bok pressure.

Make no mistake‚ the Boks were the unlucky side in this match and still won.

In the build-up to Rieko Ioane’s first half try two minutes before the break‚ there was a clear knock-on‚ yet the try stood.

Referee Nigel Owens missed so much‚ such as a collapsed maul midway through the second half that should’ve been a Bok penalty.

What about an advantage for NZ after a knock on by the Boks‚ that saw the All Blacks make 20 metres‚ only for Owens to say there was no advantage when the phase broke down?

From the penalty and lineout the All Blacks scored again‚ with hooker Codie Taylor barging over.

No‚ this was not a lucky performance by the Springboks. Gutsy‚ desperate‚ skilful‚ belligerent‚ coherent and courageous yes. But lucky? No‚ despite Erasmus’ attempts at diplomacy.

It was a win earned through toil and commitment.

It sounds ridiculous that a side which leaked six tries as the Boks did‚ could be commended for its defence‚ but that’s precisely the case.

The Boks made over 200 tackles with indefatigable flank Pieter-Steph du Toit making a staggering 28 and lock Franco Mostert a monumental 23.

No wonder Du Toit was in tears after the game.

The only inkling of luck the Boks had was that All Black flyhalf Beauden Barrett missed four of six kicks at goal.

But Barrett was under pressure from the outset and the superb NZ playmaker could barely draw breath before he had a Bok tackler down his throat.

Despite some deft touches‚ such as putting little brother Jordie away from an early try‚ Beauden was rattled.

The Boks won because they dominated the physical battle. We can talk about ‘running rugby’ and ‘attacking intent’‚ but the only way to beat New Zealand at home‚ is to bully them.

The British & Irish Lions understood this in 2017 and the Boks thankfully learned from their example.

The All Blacks are a great team‚ but they are human.

When confronted with a situation where they were losing the collisions and being knocked back in contact‚ their composure strayed‚ leading to mistakes and ultimately to Bok points.

At its heart rugby is a simple game physical intimidation. The All Blacks generally win the physical battle‚ which in turn allows them to show off their array of skills.

On Saturday though‚ the All Blacks showed their skill‚ but lost the fight.

They were like a champion boxer facing a less skilled‚ but brutal challenger.

NZ were continually punched in the face by an opponent that refused to take a backwards step even when they had to absorb some terrible punishment themselves.

The All Blacks landed blows but the Boks kept coming back stronger.

Eventually one team wilted‚ and it wasn’t the one wearing green and gold.

1. Pieter-Steph du Toit (flank) – What can you say about a man that played at warp speed from kick-off to the final whistle? He was everywhere‚ whether making huge tackles or carrying the ball into contact.

When books are written and documentaries made about this historic win‚ PSDT will be the star of the show.

2. Warren Whiteley (No 8) – After two years as a lightweight looseforward‚ apparently out of his depth‚ Whiteley finally arrived as a Test player.

The Lions skipper stayed tight‚ made huge tackles‚ covered acres of ground and linked on attack‚ as a quality eighthman should.

He made Duane Vermeulen’s absence seem irrelevant. And there can be no greater compliment than that.

3. Elton Jantjies (flyhalf) – He only had 33 minutes off the bench‚ but what a 33 minutes they were. Jantjies‚ like Whiteley‚ has never reproduced Super Rugby form in the Test arena until Saturday.

He entered the fray and immediately posed tough questions of the All Black defence by putting runners into space.

His vision and timing of the pass were exceptional‚ while Jantjies defended as if Butch James had somehow taken over his body.