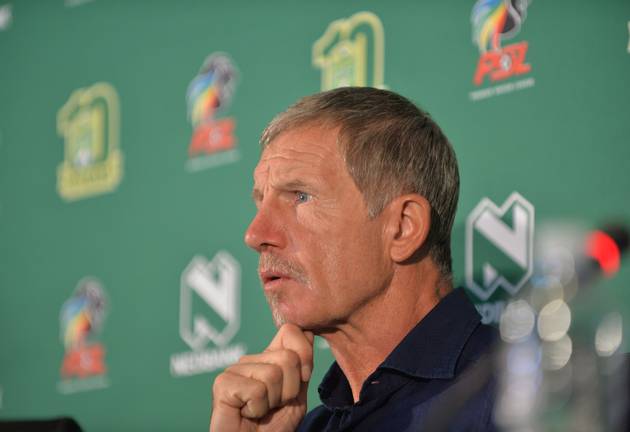 Bafana Bafana coach Stuart Baxter could be headed on a collision course with the Confederation of African Football (Caf) after he named midfielder Lehlogonolo Masalesa in the squad that is to play Botswana in the African Nations Championship (CHAN) qualifiers over two legs in the coming days.

Only locally-based players are eligible to play in the Chan tournament but Masalesa‚ who was until recently contracted to Greece Superleague side Larissa‚ has since become a free agent and his eligibility is now the subject of much speculation.

Caf are yet to make a final decision on his eligibility and Baxter does not know if he will be able to field the player against Botswana in the first leg in Francistown on Saturday.

“I must say upfront that we have a slight challenge with (Lehlogonolo) Masalesa because he was initially contracted to an overseas club and he was not considered for selection‚" the Briton said after announcing the 23-man squad at Orlando Stadium on Tuesday.

"He has since become a free agent but now he is not attached to any team‚ which leaves a grey area as to whether he can play for us or not. We have consulted with the authorities and we should have an answer sooner rather than later.

“Masalesa is in a little bit of limbo at the moment because we thought he was non-selectable because he was a foreign-based player.

"But now he is out of contract and in theory he is not a foreign-based player and we have the okay to select him.

"We are waiting for confirmation from the authorities before we say that he is a definite member of the squad.

"The call has been made by me to take him but we are just waiting for that confirmation. He is a free agent‚ but we don’t want to put our eggs in one basket and then later forfeit the game because we did not have the conformation in writing.”

On the subject of putting the squad together‚ Baxter said it was difficult because some of the clubs decided not to release their players.

“The squad selection and assembly for Cosafa and Chan‚ especially at this time of the year‚ is an imposition‚ a war of attrition.

"You want to call up players but you can’t get some of them. Some of the clubs have been cooperative and they have helped us out while some have had to pull the plug but I don’t blame them.”

“Besides Masalesa‚ whose selection I have reserved until we get an okay from the authorities‚ we have the players together and it’s going to be interesting with a mixture of younger U20 players and a few players with PSL experience‚” he said.

In the squad‚ Baxter included Khulekani Kubheka‚ Tercious Malepe‚ Malebogo Modise‚ Sandile Mthethwa‚ Sipho Mbule and Teboho Mokoena from the Amajita squad that featured in the Fifa U20 World Cup in Korea.