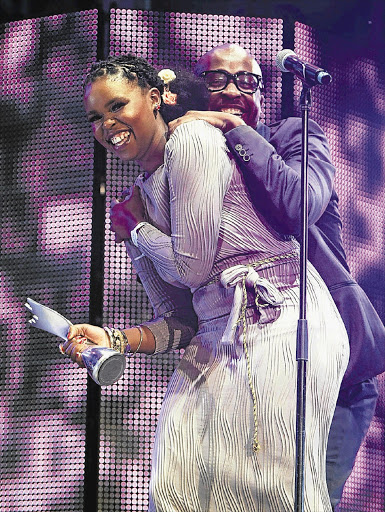 Zahara and DJ Sbu celebrate after winning the song of the year and the best single of the year awards respectively at the Metro FM's awards ceremony in Nelspruit on Saturday night Picture: SIMPHIWE NKWALI

While new singing sensation Zahara was scooping up awards at the Metro FM gala on Saturday night, another award winner, DJ Cleo, was hundreds of kilometres away at Moses Mabhida stadium, Durban, apparently unaware that he was to be honoured.

He was watching a Telkom Challenge semifinal soccer match between Orlando Pirates and Lamontville Golden Arrows.

DJ Cleo won the Top Digital Downloads award but was not at the ceremony to collect it.

Metro FM said his management had failed to respond to numerous calls on Friday inviting him to the ceremony.

But Cleo said he had not been invited.

When fans on Twitter wanted to know why he wasn't there, he said: "No invite. No show . wasn't invited, sorry."

The DJ has criticised the radio station for not playing his music.

"Our music compiler called DJ Cleo on Friday and he never picked up. He was left a message to say he was [going to win] an award and we would love to have him at the show. His manager didn't respond either," Ngidi said.

She added: "We will make sure [the award] gets to him. It's not ours."

But DJ Cleo's no-show was not the only blunder at the awards ceremony.

Kgosinkwe was quoted as saying: "I received an SMS telling me that I was no longer booked at one hotel in Nelspruit. Later I got another SMS that told me I was booked at another hotel in White River."

Skitzo, of Ci9ine, said performers had been made to move "around like headless chickens".

He said the organisers "didn't have any clue of where we should sleep".

The show itself was riddled with what appeared to be a challenge for most local awards shows - the teleprompter embarrassing presenters - except for co-host TBO Touch, who continuously ignored the script to talk about himself.

During the announcement of the best urban gospel award, music from Mary Mary could be heard blaring from the sound system.

Three-times winner on the night, AKA, had to listen to 50 Cent and later Rick Ross's "Aston Martin Music" as he collected his statuettes.

Co-host Zizo Beda's squeaky clean image was left intact despite her microphone not being switched off on a couple of occasions.

Beda could be heard speaking backstage but there were no alarming statements.

Said Nene: "It was horrible. I couldn't even hear myself."

The awards ceremony will be broadcast on SABC1 on December 9.