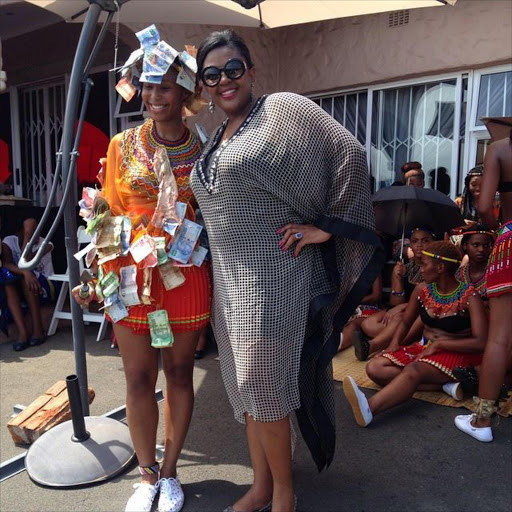 The 24-year old star has come out in defense of the 'umhlonyane' ritual which was carried out for her this past weekend, and has written a lengthy post about how certain cultural practises are unique to each family.

Dlamini was culturally re-introduced to her community as a woman of virtue at her KwaZulu-Natal home recently. She underwent 'umhlonyane' a traditional Zulu ceremony to celebrate her womanhood and to proclaim that she had looked after herself well and had not had a child out of wedlock.

However, shortly after Dlamini posted images online of herself cooking in traditional attire, spending time with her fellow Zulu maidens and fetching a spear from her uncle's house - she was slammed for dictating her own version of umhlonyane. Comments on social media were particularly scathing with several people questioning the Dlamini's cultural values and lambasting them for distorting Zulu culture.

On Twitter, the furious sports presenter tweeted: NO ONE and NO DEGREE has the right to question another family's cultural ritual procedures!!! (I am) Insulted.' She continued her rant, adding: "Culture is not written down like religion, it is passed down through practice from our forefathers. Thus each family's rituals are unique!"

Dlamini's outrage comes after a report which stated she had gotten the umhlonyane ceremony wrong and quoted two experts. Cultural expert, Qhuzulini Sithole, the founder of Zindala Zombili told Sowetan that umhlonyane was a process that every black girl has to go through and cannot be performed at a later stage. Zombili also criticised Dlamini for carrying a spear, stating that was done during umemulo, another significant practise which is carried out on young women.

Dlamini took to her Facebook page to defend her actions, saying that Zulu culture varied from family to family.

"When in hiding (emgonqweni) with izintombi zami (my girls) they were all sharing stories about their Mhlonyane ceremonies and where many of the practices of the ceremony were similar, none of the ceremonies were the same. Some girls had to look for umkhonto (spear) after their uncles hid it. In my case, according to my family practice, I had to go ko malume Mzwakhe (my maternal uncle) in Claremont, where I had to wait at the gate in song and dance for him to hand me the spear. The spear according to our ritual, represents the ancestors from my mother’s side of the family."

Dlamini added that her family was guided by two cultural experts.

"I never knew about uMhlonyane, I only knew of uMemulo and with this process explained to me, according to our family practices, uMemulo takes place when ilobolo (dowry) has been paid for in full and the spear is provided by the groom. It is thus that my parents, under the guidance of uMaMpanza, saw fit to perform and host this event for me as I needed to be introduced as a woman.

"This can happen at any age, even married women have found themselves having to perform this ritual, as required by family and ancestors permitting. This was confirmed by Head of African Studies at the University of KwaZulu-Natal, Professor Sihawu Ngubane, to my paternal Aunt Duduzile Dlamini."